If you ever wondered what would happen if Walt Disney was also the Jigsaw Killer, then a) you are a very interesting person, and b) these “Escape Room” movies were made for you.

“Escape Room: Tournament of Champions,” the second film in Adam Robitel’s PG-13 horror franchise, solidifies the series’ mission statement to show off a deadly and insidiously complicated amusement park, where the theming is heavy-handed and all the attractions will kill you if you don’t interact with them exactly the way the designers intended.

These aren’t movies about protagonists undergoing a meaningful transformation. They are extended YouTube walkthroughs of the coolest places you’d never, ever want to go. 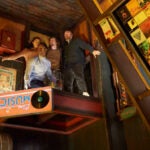 The original “Escape Room” saw a group of people drawn into a game constructed by the Minos Corporation. Each room they encountered had a different visual theme, and only by solving tricky clues could the heroes escape with their lives. At the end there was supposed to be only one survivor, but Zoey (Taylor Russell, “Waves”) finds a way to think outside the box, saving not just herself, but also Ben (Logan Miller, “We Summon the Darkness”). Afterwards, naturally, nobody believes their story.

Some time has passed, and Zoey remains obsessed with proving that the Minos Corporation is real, dragging Ben along with her on a road trip to collect evidence. The clues lead Zoey and Ben to a mysterious building in New York City, but strange developments take them instead into a subway car which quickly derails, and sends them — and a small group of strangers, each of whom having already survived another escape room — into a brand-new sightseeing tour of whatever absurdly imaginative “escape rooms” the Minos Corporation (i.e., the sextet of screenwriters) have concocted this time.

There’s an electrified subway car with a killer game of spellcheck, a hopscotch art-deco laser bank heist, a beachside getaway that might become a permanent vacation, and several other surprises besides. Each new room is implausible yet impeccable; few, if any, of the escape rooms in “Tournament of Champions” could conceivably have been constructed underneath a major metropolitan city without someone asking questions about openings on the construction crew or why the laws of physics are being broken so brazenly today.

But let’s not pretend that’s a bad thing. “Escape Room: Tournament of Champions” flings itself headlong into its own stupidity but it avoids seriously injuring itself in the process. Everything about these movies is irrational — especially the plot, which has more than one “clever” twist which makes the exact opposite of sense — but at no point does Robitel’s film claim otherwise, so we have no real right to feel betrayed when the film loses its connection to reality.

The cast of “Tournament of Champions” features Thomas Coquerel (“The 100”) as Nathan, a priest who thinks his faith could save him; Holland Roden (“Mayans M.C.”) as Rachel, a woman with an unexpected secret; Indya Moore (“Pose”) as Brianna, an experienced travel writer; and Carlito Olivero (“Step Up: High Water”) as Theo, who promised his wife he wouldn’t be late to her birthday.

These performers are stuck in tricky, dangerous roles; mostly they’re asked to rummage for clues and yell loudly to each other about how not to die. They have so little to work with that it’s amazing they get the job done at all, and yet they each manage to imbue their potential victim with at least a twinge of humanity, so that you’ll care when they expire horribly. 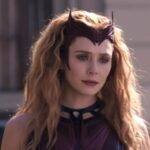 It’s that balance of extremely improbable set pieces and simple, baseline humanity that makes “Escape Room” and “Tournament of Champions” function so efficiently as B-movie thrillers. Robitel’s film isn’t cruel enough to claim that human life has no value. Zoey is driven by the trauma of watching decent human beings die for no reason, not the pursuit of vengeance or mayhem. It’s the villains of these movies who are here to watch these people die. The movie audience, Robitel presumably (perhaps optimistically) theorizes, is here to see them escape, and so we have to care about these people when they’re alive, not just when they’re about to be suffocated.

The “Escape Room” movies would be nothing without stellar production design and art direction, so kudos to Edward Thomas, Mark Walker, and Cecelia van Straaten (“Monster Hunter”) and their excellent crews for knocking it out of the park once again. Their quirky designs are full of hints and red herrings and would probably be wonderful to explore in person, if you didn’t mind getting liquified in acid for touching the wrong prop.

“Tournament of Champions” also features an exciting score by Brian Tyler (“Those Who Wish Me Dead”) and John Carey (“Escape Room”), and sound design filled with clockwork mechanisms that announce the start of yet another deadly puzzle. When combined, it’s as if they proudly announce, “Here we go!”, inviting the audience on yet another ludicrous little ride.

Make no mistake: “Escape Room: Tournament of Champions” may be fun, it’s also incredibly stupid. The premise makes no sense. The mechanics make no sense. The plot makes no sense. Look elsewhere for storytelling sanity. Look here if you want to see confident, creepy absurdity, with a ghoulish imagination and showmanship to spare.

“Escape Room: Tournament of Champions” opens in US theaters July 16.