“Escape Room: Tournament of Champions” is getting a new cut for its home entertainment release, and the extended version of the horror film gives a peek behind the scenes at the masterminds who designed the escape room death traps.

The “Escape Room” sequel will be available for digital release and on DVD and Blu-Ray with an additional 25 minutes of footage on Sept. 21. Among the changes are an alternate beginning and ending that hint at the villains behind the curtain of the Minos Escape Rooms.

TheWrap has an exclusive first look at the additional scene that reveals a brand-new subplot that didn’t make the theatrical cut. Here we meet one of the apparent higher-ups at Minos as he converses with his game master — and prisoner — Claire, as she unwittingly helps them design a series of traps that can kill the hero, Zoey. 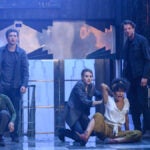 “Maybe you should’ve built these rooms yourself then instead of obsessing over a way to kill Zoe. She’s not ready,” Claire (Isabelle Fuhrman) says in the exclusive clip. “She thinks that she can expose us,” Henry (James Frain) says in response.

This brief scene is a signal that the extended cut of “Escape Room: Tournament of Champions” is likely going to contain a lot more substance than just having a few deleted scenes thrown back in. If the other new scenes are anything like this, the new cut could be a meaningful upgrade.

“Escape Room: Tournament of Champions” is a sequel to the 2019 horror film as directed by Adam Robitel. It follows six people who unexpectedly find themselves locked in another series of escape rooms, slowly uncovering what they have in common to survive… and discovering they’ve all played the game before. Taylor Russell, Logan Miller, Indya Moore, Holland Roden, Thomas Cocquerel and Carlito Olivero all star.

The digital and Blu-Ray editions of the film’s release also include bonus features that give you a deeper look inside the Minos escape rooms, as well as profiles of the “players” and a feature with director Robitel on how he hoped to raise the stakes for the sequel.

“Escape Room: Tournament of Champions” will be available through Sony Pictures Home Entertainment on digital on Sept. 21, and then the Blu-Ray and DVD will drop on Oct. 5. Check out the Blu-Ray cover below: