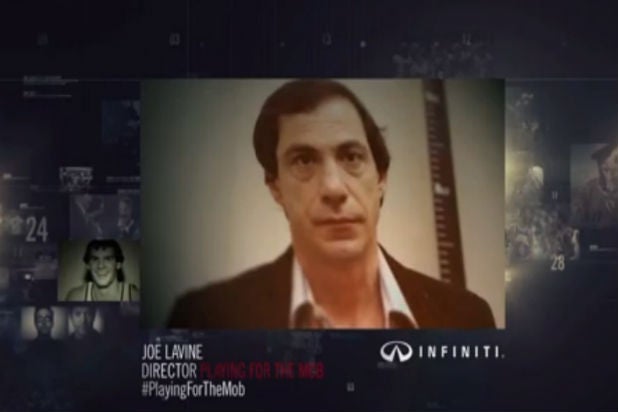 Ray Liotta, Henry Hill, Michael Rapaport, Al Michaels and Brian “The Boz” Bosworth are some of the larger-than-life characters featured in the latest “30 for 30” series from ESPN Films.

In 2009, “30 for 30” was launched to mark ESPN’s 30th anniversary, and has since gone way past the original films celebrating the first three decades of the sports channel. It is currently celebrating its own fifth anniversary with over 50 total films (or 75 feature-length docs under all banners) in existence, executive producer Connor Schell told TheWrap.

“In most situations, these things play out totally differently than how they’re conceived,” Schell said. “We’ve stayed remarkably close to what the original notion was. And I truly can’t believe that.”

The first new film to air on Oct. 7, “Playing for the Mob,” is “Goodfellas” meets March Madness telling the often overlooked story of how Henry Hill lured Boston College basketball players into a cheating scandal that fixed games to line the pockets of the Mafia during the 1978-1979 season.

Not only did the filmmakers get real life mafioso Hill to spill his story for the doc, Liotta lent his voice as a narrator to add the authenticity to the notorious mobster-turned-rat.

“It was always obvious that Ray would be the narrator, especially if he could deliver it like he did in ‘Goodfellas,'” said co-director Joe Lavine at a preview screening in Los Angeles. “We never thought we’d get him and be that lucky.”

“We had talked about De Niro and different people in the beginning but Ray brings the film to another level of familiarity,” fellow director Cayman Grant told TheWrap.

In the cheating plot, Hill and his Pittsburgh crime family cohorts, Rocco and Tony Perla, recruited  player Rick Kuhn to deliberately miss free throws or shots in select games so that while B.C. still won, they didn’t cover the point spread (the amount by which bookies predicted they would win) and the gangsters who bet on their underdog opponents raked in big payouts.

While the scheme was mentioned in the Martin Scorsese classic “Goodfellas,” many viewers don’t know that it was instrumental in taking down James “Jimmy the Gent” Burke, played by De Niro in the crime drama, after Hill became an FBI informant. Also dragged into the mess was all-American boy and Boston College star Jim Sweeney, whose reputation was forever soiled despite not being indicted.

See photos: Celebrating NBA Finals With 12 of the Most Dramatic Moments in Sport Movies (Photos)

Hill got a new identity in the witness protection program and became a notorious Hollywood figure following “Goodfellas” until his death in June 2012.

The fascination for the filmmakers with the point-shaving scandal came because both Lavine and Sweeney are from Trenton, N.J.

“We’re the same age and we didn’t know each other growing up but anyone from there knew of him,” said the director. Then when a Sports Illustrated interview with Hill came out revealing all the dirty details of the plot, the former star player’s name got forever tied in with the Mob.

Years later, Grant and Lavine joined forces on the story and ultimately pitched it to ESPN.

“They immediately thought it was a good idea. The reason it was quick was because we were able to represent all sides  — we had the fixers, the ball players, and the legal side with the FBI and the prosecutor,” explained Grant.

“My dream was for it to be a ’30 for 30’ as they’re my favorite sports films,” Grant added. “They take a topic and blow it out and you learn all of this stuff behind it, they delve more into the human side and its always about telling the story.”

The resulting journey involved Hill coming to her house — “sober the first time,” pulling a knife out the second — and hours filming some of recent history’s most notorious gangsters. “They are very charming folks. I don’t know why I wasn’t scared!” confessed Grant.

Along with reuniting former Mafia bosses, something else a little different is taking shape with the ESPN series. About 18 months ago, Schell and his team began investing in “30 for 30 Shorts,” briefer projects exist in the digital space, where they have fewer length constraints.

The “Playing for the Mob” debut will be immediately followed by a special premiere of a new short titled “The Great Trade Robbery,” directed by Stu Zicherman. Launching on fellow “30 for 30” executive producer Bill Simmons’ Grantland the next day, the short film is a first-person account by Jimmy Johnson of one of the biggest and most lopsided trades in NFL history — when the Dallas Cowboys built their Super Bowl dynasty 25 years ago by sending star running back Herschel Walker to the Minnesota Vikings.

That flexibility to run parallel with new viewing habits leads Schell to conclude that the future of one of ESPN’s biggest franchises is bright. “We could do many, many more — there is no shortage of incredible stories,” he concluded.

See a preview below.