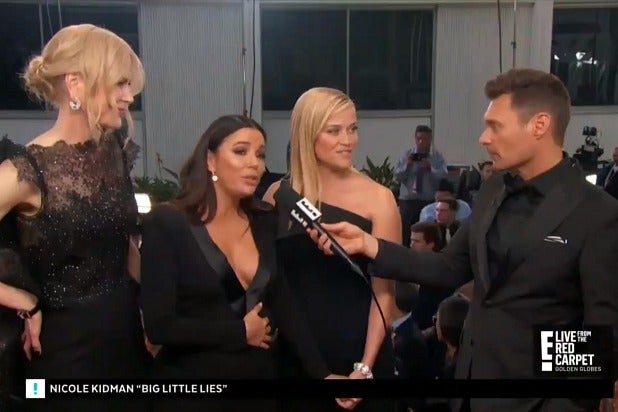 Eva Longoria used her appearance on the Golden Globes red carpet, like many other stars Sunday evening, to promote the #TimesUp movement which calls out “sexual assault, harassment and inequality in the workplace.” And she also was the second star of the evening to call out E! Entertainment while on its red carpet show over not paying ex-host Catt Sadler equally to her male co-host.

“We support gender equity and equal pay,” Longoria said at the end of her interview with her “Big Little Lies” costars Reese Witherspoon and Nicole Kidman. “And we hope that E! follows that lead with Catt as well. We stand with you, Catt.”

E! host Ryan Seacrest then chimed in with his support of Longoria’s statement: “I love Catt. We love her.”

Sadler quit the network after she said she discovered “a massive disparity in pay between my similarly situated male co-host and myself” and could not reach an agreement with the network for equitable pay.

At the beginning of E!’s “Live From the Red Carpet” special ahead of Sunday’s Golden Globe Awards, “Will and Grace” star Debra Messing shouted out Sadler, saying: “I was so shocked to hear that E! doesn’t believe in paying their female co-hosts the same as their male co-hosts. I miss Catt Sadler. So we stand with her. That’s something that can change tomorrow, you know. We want people to start having this conversation that women are just as valuable as men.”

The vast majority of stars at the Golden Globes wore black in solidarity with the #TimesUp movement, and social issues dominated the chatter on the red carpet, no surprise after a year in which scandal after scandal rocked men in Hollywood, exposing the long-festering male-dominated culture in a way it had never been exposed before.