ALSO READ:
"What Else TBS Wants From Coco"
"Turner’s Koonin: How TBS Wooed Conan — and Why"
"How TBS Out-Foxed Fox"
"Lopez Producer: Conan Will Boost George"

At first, the figure on the small stage is almost unrecognizable.

He’s got a scraggly beard. He’s dressed in dark colors. He’s got a guitar strapped across his chest, strumming it wildly as he belts out a bluesy, mid-’70s Elvis tune about polk salad. 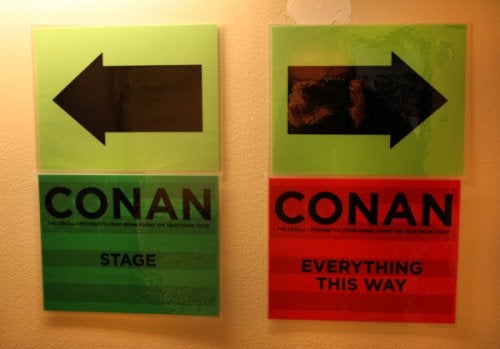 Ladies and gentleman, Conan O’Brien has left the building. All hail Coco — the once and future late night host who Monday night will be born again (at least for a few weeks) as a rock star.

It’s the afternoon of April 2, a little more than two weeks before the man NBC dumped as host of "The Tonight Show" is set to kick off a cross-country music and comedy extravaganza in Eugene, Oregon.

O’Brien, longtime sidekick Andy Richter, executive producer Jeff Ross, a dozen writers and staffers, some band members and a slew of tech support types are at a nondescript soundstage directly across from Burbank’s Bob Hope Airport.

A sign just outside the parking lot directs visitors to the stage with just one word: Coco.

There’s no security at all. No fancy table of crudites or any sort of craft services to speak of.

On stage, O’Brien’s act is still taking shape. But the heart of it is in place.

As the practice run goes on for more than two hours, it becomes clear things will have to be cut. "There’s too much show," one person at the run-through laments.

Some things seem too good to cut, though:

– A cold open in which O’Brien — in full Fat Elvis mode — is seen aimlessly wandering about his home, alone, adrift and waiting desperately for someone to call him with a job offer. Drowning his sorrows in carbs and alcohol, while a mournful pop song from the ’70s plays, O’Brien drifts further away — until finally he gets a call inviting him to hit the road. Cue the "Rocky" music, and the Coco transformation.

– O’Brien is backed up on his several musical numbers by two saucy, hip-shaking soul-singers known as the Co-quettes. They banter with O’Brien, trading off with Richter as O’Brien’s chief comic foil for the night.

– Video interstitials throughout the show feature a bald, generic network executive warning the audience not to say anything bad about the Network — because they, like Conan, are being watched. It’s not a slam against NBC — though the fake programs this exec introduces sound like something Ben Silverman might imagine. It’s more just a nod to the events of the past four months.

- -O’Brien warbles his take on "Polk Salad Annie," but changes the lyrics to reflect his tough upbringing in Brookline. Brookline, Massachussetts. Where Whole Foods was a harsh reality. It’s classic O’Brien self-mockery. Disco classic "I Will Survive" also gets a makeover, with lyrics appropriate to a scorned talk show host.

– Conan blogger Aaron Bleyaert at one point is dispatched into the audience wearing a full costume made up of bags of chips. (We’ve heard the bit, which is quite humorous, didn’t make it.)

O’Brien is fully in control. He makes suggestions for changes on the fly, analyzing bits and jokes the way he no doubt did during his two late-night shows.

Ross jumps in with suggestions. Richter offers his input. There’s a debate over whether a camera should linger on O’Brien and band member La Bamba as they share … an intimate moment.

But in the end, this is Conan’s show: He clearly has a vision for what he wants this 90 minutes or so to be.  Every second needs to be packed with comedy or music. If something’s not striking O’Brien as funny, he doesn’t shy away from saying so.

It’s during the musical performances, however, that O’Brien no longer seems like a Late-Night Talk Show Host. This is where he appears to have evolved into something different — something close to iconic.

Whatever awkwardness sometimes still remains when O’Brien is doing an interview totally vanishes when he picks up his six-string. It’s all for comedy, of course, but there’s a command, a presence that was lacking during most of his TV career.

Viewers got a taste of this transformation during the final weeks of his reign as host of "The Tonight Show." Freed from caring about his network bosses, energized by the online uprising in his support, it was clear O’Brien was becoming a different performer — not cocky, not arrogant, but also no longer quite as geeky as he once was.

Now, it seems, the metamorphosis may be complete.

Toward the end of a two-hour visit, O’Brien’s wife and two young children enter the rehearsal space. Daddy is playing on stage as they quietly walk in and watch from the back.

All three are beaming, and the two little ones seem mesmerized by the sight of their father, who’s been temporarily transformed from lanky comic to rock star. They begin to dance, the youngest jumping up and down with the type of pure glee even the most ardent Coco supporter would be hard-pressed to match.

O’Brien spots his kids in the room and quickly adjusts some of his more adult on-stage lyrics to account for the presence of his kids. He loses none of his newly found swagger, however.

Afterward, he greets the trio, not as Coco or Conan — but just as a dude happy his wife and kids came by. He acknowledges a reporter in the room, though contractually remains prohibited from having an official conversation.

And then, O’Brien and Ross are off — presumably to a backstage huddle to discuss how the day’s practice went.

According to Broadcasting and Cable, some Fox affiliates were doing a little victory dance Monday over the fact that they’ll get to keep showing syndicated sitcom repeats rather than air a new show hosted by O’Brien.

These short-sighted bookkeepers will want to avoid seeing the Legally Prohibited from Being Funny on Television tour. Because, if the final product is anywhere near as thrilling as the practice session witnessed April 2 indicates, they — and Fox — may have missed out on landing a talent fully ready to break out as a pop culture phenom.