Facebook apologized Friday after a video featuring Black men in confrontations with white police officers and other civilians was found to be labeled by artificial intelligence software as a video “about primates.”

“This was clearly an unacceptable error and we disabled the entire topic recommendation feature as soon as we realized this was happening so we could investigate the cause and prevent this from happening again,” Facebook said in a statement to USA Today.

The Daily Mail video published to Facebook, first reported by The New York Times, was accompanied by a prompt asking whether users would like to “keep seeing videos about Primates.”

“As we have said, while we have made improvements to our AI we know it’s not perfect and we have more progress to make,” the Facebook statement said. “We apologize to anyone who may have seen these offensive recommendations.”

In 2015, Google apologized after its Photos feature auto-labeled Black people as “gorillas.” A year later, image searches on Google were found to show police mugshots when “three Black teenagers” was entered, while an entry for “three white teenagers” surfaced smiling white teens.

Also in 2016, Microsoft shut down its chatbot Tay after it started using racial slurs. 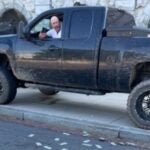