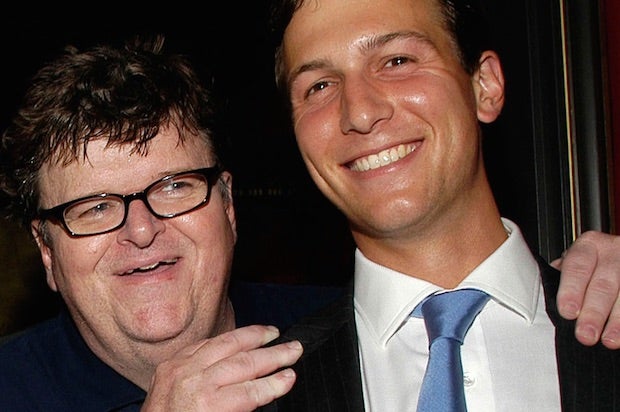 “Fahrenheit 11/9,” which had its world premiere on Thursday night at the Toronto International Film Festival, was supposed to be Michael Moore’s new movie to bring down President Donald Trump.

But that’s the movie we thought Moore was making, not the movie he actually made.

The movie he made is bigger, messier, more sprawling and ultimately more rousing. It goes on long detours, changes course and leaves Trump offscreen for huge chunks of time, as it turns into something that is less an anti-Trump diatribe than a demand for action.

The heart of the movie, it turns out, isn’t Trump at all — it’s the mothers crusading for action in Flint, Michigan, the teachers successfully going on strike in West Virginia and, most of all, the students from Parkland, Florida who turned the mass shooting at their school into the start of a national movement.

The audience at the Ryerson, primed for the message and the man, interrupted the film with applause at several points and rewarded Moore with a standing ovation at the end. The filmmaker  brought several Parkland students onstage for the post-screening Q&A at the Ryerson Theater, and one of them, David Hogg, asked a question that might be the takeaway Moore is looking for: “Who’s ready to save America?”

The point of the film is that America needs to be saved — not from Trump so much as from the system that led to his election.

And that election is the jumping-off point for “Fahrenheit 11/9,” which begins with a lengthy section on election night and leads into the opening credits with a simple question: “How the f— did this happen?”

For a while, it goes down that road, tracing the rise of Trump, who Moore claims only decided to announce his candidacy as a ploy to get NBC to pay him as much for “The Celebrity Apprentice” as they were paying Gwen Stefani for “The Voice.” (He offers no evidence for this.)

Most of the questions going into “Fahrenheit “11/9,” which Moore only announced in June, dealt with how much new info he had on Trump and how damaging it would be. But, as Moore points out, Trump has done the things that should have disqualified him out in the open. So while Moore runs through the charges of racism and sexual assault and financial corruption, those are nothing new. (He barely touches on Russia and collusion at all.)

Then “Fahrenheit 11/9” starts taking detours. The biggest one, which he returns to for lengthy chunks of the film, is the Flint water crisis, which took place during the Obama administration but which Moore lays at the feet of Michigan governor Rick Snyder, who he labels a Trump crony.

(By the way, he comes down very hard on Obama, too, and even harder on the Democratic Party.)

The Flint section initially feels like a lengthy digression, then a movie of its own that Moore could have made. Throw in segments on the plight of teachers and working-class families in West Virginia, the Democratic establishment’s timidity and pro-Hillary Clinton bias, the shooting in Parkland, the electoral college, voter apathy and a few other topics, and the film named for the day of Donald Trump’s election suddenly doesn’t seem very much about Trump at all.

But it is all about the America that elected Trump, which is why “Fahrenheit 11/9” grows slowly from an exhausting movie that is all over the map to a rousing one that makes a call to arms in troubled times. (And since Alex Jones is seen in the movie accusing Moore of encouraging violence, I should point out that when I say call to arms, I mean it entirely metaphorically.)

For Moore, the history of Trump’s rise and the perils he sees in a continuing Trump presidency are secondary to his desire to encourage the kind of action he sees from the Parkland students, the teachers who went on strike in West Virginia, the ordinary citizens who are running for office around the country.

“Our time is up,” Moore says near the end of the film – and while he said in the post-screening Q&A that he doesn’t like the word hope, the film manages to gather all its disparate strands and proclaim that maybe, just maybe, a broken system can be repaired before the American experiment crumbles into something far from what it set out to be.

But was he just preaching to the converted (or the Canadians?) The country was divided when Moore made “Fahrenheit 9/11” in 2002, but the gulf between right and left has never been wider than it is now. And remember, “Fahrenheit 9/11” came out in an election year, too — and despite its damning impact and all those box-office dollars that made it the top-grossing documentary of all time, President George W. Bush was re-elected.

But a movie this sprawling wants to do more than get people to the polls. Its TIFF premiere was a rousing launch, but Moore would be the first to tell you that there’s work to be done.