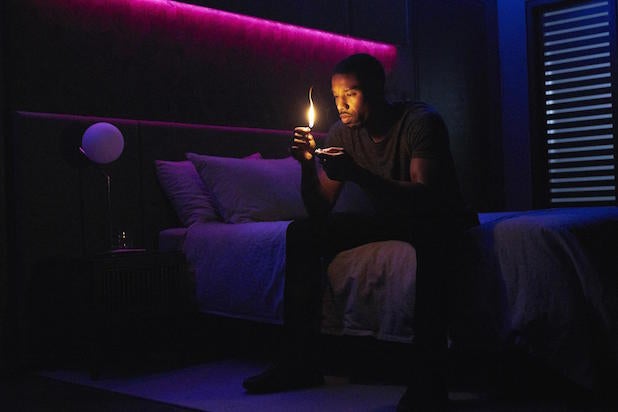 Most people who see Ramin Bahrani’s “Fahrenheit 451,” which had a midnight screening at the Cannes Film Festival on Saturday and comes to HBO on May 19, will probably think of it as a new adaptation of the classic science-fiction novel by Ray Bradbury, who posited a future in which books were outlawed and the job of a fireman was to burn them.

But in Cannes, there’s another strong association, because an earlier film based on Bradbury’s book was directed by legendary French director Francois Truffaut, whose only English-language film was a 1966 version starring Oskar Werner and Julie Christie.

So Bahrani, the director of “99 Homes” and “Chop Shop,” comes to the Croisette having to measure up to two formidable artists — a task he approaches by doing his best to ignore Truffaut and give glancing service to Bradbury.

Bahrani’s “Fahrenheit 451” is more high-tech than Truffaut’s, of course, and far more violent. It jettisons big portions of Bradbury’s story to zero in on one relationship, and adds a shoot-‘em-out finale miles away in tone from the novelist’s more contemplative coda. (To be fair, that coda followed the nuking of a city, so the author hardly eschewed violence.)

It works, to a degree, though largely as a showcase for a battle between Michael B. Jordan and Michael Shannon. The former plays Guy Montag, a gung-ho fireman primed for a promotion and seemingly eager to be the brash hero of every book-burning for the mindless masses who watch his exploits on 24-hour-a-day reality TV (or is it fake news?) projected on the side of the skyscrapers in the unnamed future metropolis.

Shannon is Captain Beatty, Montag’s boss, whose quintessential Shannonesque villainy is slightly undercut by the fact that he seems to have read a lot of the books he burns, and can eloquently explain that they contradict each other and would just confuse regular people.

Those people are kept in a state of perpetual vacuity by state news and by “The 9,” this film’s version of the internet, albeit an internet designed to dumb down everybody who uses it — which is to say, everybody.

In Bradbury’s book and Truffaut’s film, the misguided masses were epitomized by Montag’s wife, Millie, who’s been so techno-lobotomized that she can’t even remember her suicide attempt the morning after. Bahrani filmed Millie’s scenes, with actress Laura Harrier in the role, but they wound up on the cutting-room floor; in this “Fahrenheit 451,” the mindless masses are barely seen and Montag is a bachelor, all the better to hasten his showdown with Captain Beatty.

That showdown comes when Montag, spurred by a few conversations with a mysterious young woman who informs for Beatty but also has ties to the resistance, and shaken by an old woman who incinerates herself rather than watch her illicit library burn, begins to think that books just might be better for, you know, reading instead of burning.

He swipes a copy of Dostoyevsky’s “Notes From the Underground” (in Bradbury’s telling, it was the Bible) and starts having the kind of doubts we knew were inevitable from the moment Jordan strutted and grinned like the world’s most enthusiastic fireman in his early scenes.

Also Read: 'Ash Is Purest White' Film Review: The Characters Have Growing Pains, and So Does China

Bahrani’s “Fahrenheit” has its topical touches, with clear nods to today’s anti-immigrant crusades in the way people are separated into “natives” and “eels” — i.e., good citizens who do what the government tells them and outsiders who don’t. But despite the timeliness, and the spectacle of all those gleaming high-rise towers serving as giant TV screens, the film sometimes seems as besotted with the shiny images as Montag initially is with the flames he unleashes.

Bradbury and Truffaut both had more humane, more human takes on the material, and maybe more love for the power of the words that Montag ends up trying to save rather than burn.

This version of the story turns into a chase of sorts, and places the real key to humanity’s future not in the memories of a colony of people who’ve memorized entire books, but the DNA of a bird who’s been programmed with all human knowledge. (The book people are here, but they’re expendable; it’s the bird who’s got to be saved at all costs.)

Jordan and Shannon, though, make suitably fierce competitors. And in an era where inconvenient truths are branded as fake, any take on Bradbury’s cautionary tale can’t help but be resonant, and worth seeing.