Timmy Turner was an average kid that no one understood. Now, in the first trailer for “The Fairly Oddparents: Fairly Odder,” we get to meet some other members of his family.

The new series, set to hit Paramount+ at the end of March, focuses on Timmy’s cousin, Vivian “Viv” Turner (Audrey Grace Marshall), and her new stepbrother, Roy Raskin (Tyler Wladis), as they navigate life in Dimmsdale with the help of the wacky fairies we know and love: Cosmo and Wanda.

Timmy himself will make an appearance in order to gift Cosmo and Wanda to the kids. And yes, he’s still wearing his classic pink hat. But, in place of his pink shirt, he’s wearing a Princeton sweatshirt — which might surprise fans of the original series, considering his relationship with school.

You can watch the full trailer for “The Fairly Oddparents: Fairly Odder” in the video here and above. 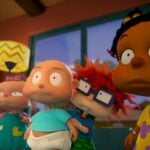 Once they arrive, Timmy lets go of his longtime fairy godparents to help his cousin adjust to the strange town. Original voice cast Susanne Blakeslee and Daran Norris return to voice the (still animated) fairies.

Because he witnesses the fairy transfer take place, Roy also inherits them and the step-siblings are required take turns making wishes. Jorgen Von Strangle even makes an appearance in the footage — and obviously, he’s just as menacing as ever.

All 13 episodes of the debut season will be available to stream beginning Thursday, March 31,