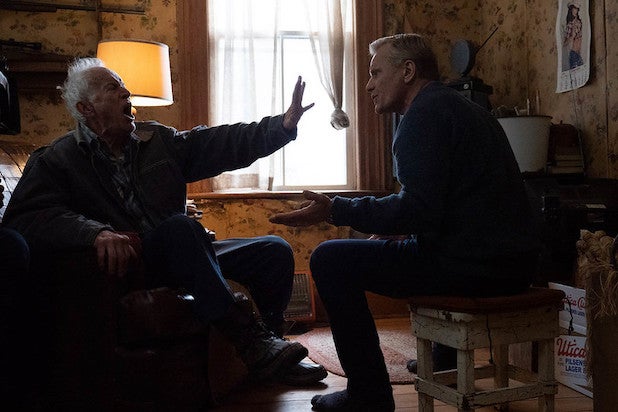 If there’s one word that comes to mind with Viggo Mortensen’s directorial debut, “Falling,” it’s control.

“Falling,” which was written and directed by the actor, poet, artist and musician who was last seen at Sundance in what would be an Oscar-nominated turn in “Captain Fantastic,” has made a beautifully controlled drama about age, memory and forgiveness — and at its heart are two men, one trying desperately to be controlled in his own life and one who is anything but controlled.

The film, which had its first press and industry screening at the Sundance Film Festival on Friday, is a restrained, quiet drama except when its characters explode. The filmmaking is subtle, but the emotions it explores are not.

Also Read: Why Neon Is the Indie to Watch at Sundance After 'Parasite' and 'Honeyland'

Lance Henriksen, best known for his roles in the “Alien” movies and in “Millennium,” plays Willis, an aging man who has spent his entire life being intolerant and intractable and is battling a dementia that simply adds levels of randomness and hysteria to his already difficult nature. Mortensen plays his son, John, who tries to put decades of bad memories behind him as he brings his father from an isolated New York farm to Los Angeles, where Willis can be close to the families of both of his children, John and Sarah (Laura Linney).

Willis and L.A. are not a good fit: “California is for c—suckers and flag-burners,” he announces pointedly as he settles in uneasily to live with John, John’s husband, Eric (Terry Chen), and their daughter, Monica (Gabby Velis). But John does what he can to ignore the taunts and homophobic insults, to be calm in the face of a man who has been provoking him for his entire life.

The film is intricately constructed, jumping back and forth in time and moving in and out of the fading memories of a man who was often as not a jerk with a cigarette in his mouth and a beer in his hand. Henriksen finds occasional shades of likability in a man who is consumed by anger and uninterested in repairing the damage he caused in his family, but his frightening performance is one fashioned in darkness.

As a director, Mortensen doesn’t make things easy for himself: We figure that a film like this is headed for some kind of redemption, but Willis seems completely irredeemable for much of the film. But Mortensen is too smart to go for an easy reconciliation, instead exploring shades of resignation and acceptance, particularly in the wake of an argument that can stand as a father/son version of the one in “Marriage Story” — primal and fearsome, it goes to places so dark that all the characters can do afterwards it attempt to crawl out of the wreckage.

At one point, John rails at his father that he has never, ever apologized for anything he’s done, but as viewers we know that’s not true: In the opening scene of the movie, Willis (played in flashbacks by Sverrir Gudnason) looks at his baby son and says, “I’m sorry I brought you into the world so you could die.”

The film does not embrace that fatalism, but neither does it pretend that these people can ever really escape it. “Falling” is a finely drawn character drama, as you might expect from much of Mortensen’s acting career, and a film that pays attention to small details that bring these people to life.

Mortensen wrote the film after his mother’s funeral, when he began recalling incidents from his own childhood, then turned them into fictional scenes loosely inspired by his memories. The first card in the end credits reads “For Charles and Walter Mortensen,” but it’s not too difficult to figure out that this one is really for Viggo Mortensen.