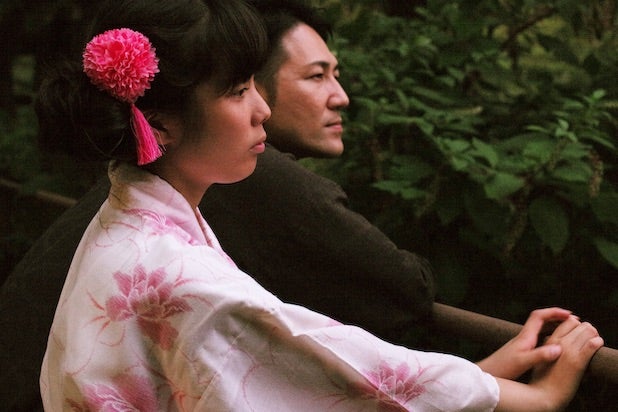 In the opening scene of Werner Herzog’s new feature “Family Romance, LLC,” a well-dressed, slightly nervous-looking man stops a 12-year old girl in Tokyo and explains that he’s her father, who left the family when she was only 16 months old and would now like the rekindle the relationship. The man, Yuichi, and the girl, Mahiro, then have a lovely interlude looking at the cherry blossoms in Yoyogi Park.

It’s all very bucolic until the next scene, which reveals that he’s actually been hired by Mahiro’s mother to impersonate her real father, who is deceased.

And “Family Romance, LLC” just gets odder from there — especially if you realize that the guy playing the “dad,” Yuichi Ishii, actually runs a real Japanese company called Family Romance, and he’s playing himself doing what he actually does for a living. A curious little meditation on the extent to which humans will go to make connections, and on the commodification of everything up to and including love, it is a fascinating film that will never be confused with one of Herzog’s major works. But it nonetheless has moments of subtle and quintessentially Herzogian rhapsody.

The film was shot quickly and inexpensively; sometimes it has a haphazard, made-for-video look to it. But other times Herzog acheives moments of real elegance and beauty as he tells this thoroughly weird and occasionally true story (Herzog is credited with the screenplay) of a company that will satisfy your soul for a price.

The company Family Romance, headed by Yuichi Ishii, does it all. Is your husband an alcoholic who can’t be trusted to walk his daughter down the aisle at her wedding? Hire a new one. (“I’m so glad we rented a father,” says the blushing bride as she adjusts her veil.) Are you afraid of the dressing-down you’re going to get from your boss for making a mistake at work? Hire Ishii to take the blame for you. Has your life seemed humdrum ever since you won the lottery, and you can’t replicate that feeling no matter how many tickets you buy? Talk to Yuichi, and he’ll make sure you’re surprised by a check-toting sweepstakes team.

The film never really gets judgmental about this kind of creepy commerce — Herzog just shows us one vignette after another, creating a gentle, pastoral tour through an unsettling new marketplace for emotion.

In a way, it’s another side of the story told in Jessica Hausner’s “Little Joe,” which premiered at the 2019 Cannes Film Festival a few days before “Family Romance, LLC.” But Hausner created an over-amped horror film with the story of a flower genetically modified to emit a scent that makes humans happy; Herzog doesn’t over-amp anything, letting us find the disquieting aspects for ourselves.

“Family Romance, LLC” skips lightly between stories, but Yuichi and Mahiro provide the throughline. And while the film doesn’t really have anywhere to go after the first half hour or so, the complications that one would expect do arise eventually. “This is going too far, isn’t it?” muses Yuichi to Mahiro’s mom, when he learns how attached the girl has become to him.

Well, yeah — but you could pretty much argue that hiring a guy to pretend to be a preteen girl’s dead father was going too far in the first place. And while it happens quietly, you could say that what happens from there suggests that Yuichi is conning himself, too.

“Who’s prepared to pay the price/For a trip to paradise,” Cole Porter wrote about 90 years ago in “Love for Sale,” his ballad about a different kind of emotional and physical transaction. “Family Romance, LLC,” a quirky little film that is Werner Herzog’s most satisfying non-documentary feature in a decade, suggests that lots of people are prepared to pay that price, but that what they get in the bargain may fall a bit short of paradise.