“Fantastic Beasts: The Secret of Dumbledore” may be the third movie in the Harry Potter spinoff franchise, but the first full trailer for the new film sends our hero Newt Scamander back to Hogwarts for the first time to capture the whimsy of the original wizarding movies.

And not only does Newt (Eddie Redmayne) have a few tricks and some new magical creatures up his sleeve this time around, he’s even contributing to the House Cup when a young Albus Dumbledore (Jude Law) awards him and Hufflepuff three points.

This trailer also sees Newt and his team exploring Hogwarts’ Room of Requirement, traversing some underground caverns, meeting with Dumbledore’s brother and even has a Muggle talk magic with a few students. So, if the first “Fantastic Beasts” film helped to establish the world outside Hogwarts, and the second film set up the stakes and even had some major twists, then this new film might be a nostalgic trip back to the beginning.

“If you listen carefully enough, the past whispers to you,” Dumbledore says in the trailer.

Of course a lot has changed since “The Crimes of Grindelwald” in 2018. For one, Mads Mikkelsen is now taking over the role of the dark wizard Gellert Grindelwald, who in the last film was portrayed by Johnny Depp until he was asked to step aside over the scandal with his failed libel court case involving ex-wife Amber Heard. We got a first look at Mikkelsen in a teaser last week, but here he declares that “our war with the Muggles begins today!”

As for Dumbledore, he’s tasked Newt and his team to help bring down Grindelwald, but he can’t remain on the sidelines much longer, and we get to see some clips of him in battle with an enormously powerful Credence Barebone (Ezra Miller). The film will also probe into Dumbledore’s mysterious backstory, something that the previous film set up with a lot of unanswered questions.

“Fantastic Beasts: The Secrets of Dumbledore” opens in theaters from Warner Bros. on April 15, 2022. Check out the new trailer above. And see some new images from the film below. 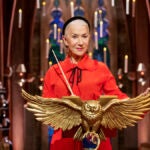