“Fantastic Beasts: The Secrets of Dumbledore,” the latest film in the Wizarding World universe and the third movie as part of the “Fantastic Beasts” franchise, brought in $6 million in its Thursday box office previews from over 3,350 screens.

While “Fantastic Beasts” looked to be a once promising franchise when it launched in 2016, the third film, “The Secrets of Dumbledore,” has been dogged by off screen controversy and is following up some tepid reviews for the previous film “The Crimes of Grindelwald.” And while independent trackers say that “Secrets of Dumbledore” could climb to between $47-50 million this weekend, that would be below the prior installment.

For comparison, “Crimes of Grindelwald” opened in November 2018 and made $9.1 million in Thursday box office previews and then opened to $62 million. It went on to a theatrical run of $154.5 million domestic and $654.8 million worldwide. The first film, “Fantastic Beasts and Where to Find Them” from 2016, likewise made $8.75 million in Thursday previews on its way to earning $74.4 million in its opening weekend. 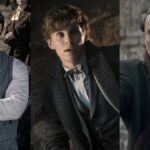 Warner Bros.’ “Fantastic Beasts: The Secrets of Dumbledore” sees Eddie Redmayne reprise his role as magical zoologist Newt Scamander, as well as Jude Law as Albus Dumbledore and Mads Mikkelsen now taking over for Johnny Depp in the role of Gellert Grindelwald. The new film sees Dumbledore and Grindelwald locked in battle as Dumbledore attempts to prevent the evil wizard’s rise to populist political power. David Yates directs the film from a script by “Harry Potter” author J.K. Rowling and Steve Kloves. It has just a 51% critics score on Rotten Tomatoes but an 84% audience score.

Also opening this weekend is Mark Wahlberg’s “Father Stu” from Columbia Pictures. That film opened early on Wednesday — with preview screenings on Tuesday — for the 5-day, Easter holiday weekend and brought in $1.5 million in its first day from 2,705 locations. It added another $775,000 on Thursday for a two-day cumulative gross of $2.3 million, and the studio is projecting it to earn $7 million over the full five days.

Wahlberg produces and stars in “Father Stu,” which is a true story about a former boxer and convict turned Catholic priest who manages to turn his life around after surviving a motorcycle accident. The film is directed by Rosalind Ross and also stars Teresa Ruiz, Mel Gibson and Jackie Weaver. “Father Stu” has a 45% Rotten Tomatoes score from critics but a 94% Rotten Tomatoes audience score. 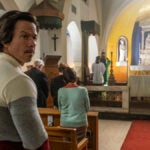 For the record: A previous version of this story said that “Father Stu” opened on Thursday. It opened on Wednesday with preview screenings on Tuesday.