Announcing the award for Best New Narrative Filmmaker at the Tribeca Film Festival's awards party, Uma Thurman had to use her stage voice when the microphone suddenly cut out. Later, Robert De Niro lost the envelope with the final winner of the night and wound up reading it off a press release.In short, the ceremony was not perfect, but it wound up as something better than that: Human. 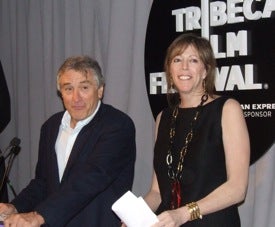 The evening gathering in Union Square brought together a melting pot of New York celebrities and filmmakers from around the world. The jurors ranged from  Mary-Kate Olsen and Meg Ryan to New York Magazine food critic Gael Greene, but despite the somewhat random assortment, their decisions yielded welcome results. Almost all of the winners were small movies that could use the extra boost — and, perhaps more importantly, they were all pretty good.

After the bittersweet immigration drama "Entre Nos" won a Special Jury Prize, co-director Paola Mendoza came close to tears as she noted that the story was based on her mother's struggle during her early years in the United States. "It's a small little film and we put our hears and souls into it," Mendoza said. The movie backs up her statement with a heartfelt performance by the director herself.

It was a similar case for documentarian Danae Elon, who also appears in the movie she directed, although she's not putting on a performance. Her documentary, "Partly Private," offers a cute, amusing survey of contemporary views on circumcision, using the birth of her two boys as a unique case study.

Winning the award for Best New York Documentary, Elon said she "would have put makeup on if I knew this would happen." But since her movie is about a deeply personal physical procedure, her natural appearance fit the occasion.

"Fixer" director Ian Olds, whose movie tracks the kidnapping and ultimate execution of the eponymous foreign journalist aid, told me he's glad to have a television deal in place for the movie (it airs on HBO in late August), and seemed somewhat nonchalant about whether or not a theatrical distributor steps up to the plate.

But that was before he won the award.

In general, it seemed that the honorees were boosted in their confidence and ready to take De Niro up on his offer to return with new works. After announcing the Best Narrative Feature Award for Asghar Farhad's "About Elly," the actor-turned-festival founder graciously posed for photographs with hordes of eager filmmakers.

"He's been doing this for twenty minutes," moaned a festival publicist. "Are we done?"

"Not yet," somebody shot back. "Bob's making that face."

And here are the complete list of festival winners:

Jury Comments: “Out of a strong selection of films, the jury was unanimous in our passion for this seamless piece of ensemble filmmaking. The universality of the characters and themes, and the directors riveting grasp of this story make “About Elly” a film that collapses barriers and deepens our understanding of the world we share.”

Jury Comments: “Rune Denstad Langlo, formerly a documentary filmmaker, shows a mastery of comedic direction in “North.” His consummate vision, strong grasp of story and command of the language of cinema make him a standout amidst a strong pool of candidates.”

Jury Comments: “Ciarán Hinds’ powerful performance explores both strength and vulnerability, while propelling and deepening the films examination of masculinity and desire. The portrayal grabbed us, pulling us even deeper into this unique and original ghost story.”

Jury Comments: “Zoe shines in this understated role. Every component of this brilliantly restrained performance displays a command of her craft that stunned and moved this jury.”

Jury Comments: “Is it nature or nurture? Is it the car or the driver? While those eternal questions will live on, we reacted with unanimous, unquestioned affection for “Racing Dreams,” and found it a completely compelling, entertaining film of incredible quality.”

Jury Comments: “Special jury mention to “Defamation” for lifting the veil – through courageous filmmaking – on a subject seldom so openly discussed.”

Jury Comments: “A film about an unsavory world, and its unsavory characters, which through its superb direction, shines a light on a world unfamiliar to many Americans.”

Best New York Narrative – Here and There (Tamo i ovde), directed and written by Darko Lungulov. (Serbia, USA, Germany).  Award presented by Richard Ledes. Winner receives $5,000 cash, and the art award “Time Can Be a Villain or a Friend” created by Hank Willis Thomas.

Jury Comments: “Our winning film was mature, it was funny, it was subtle. It gave us not only New York, it gave us great characters, a great story, it gave us the world.”

Jury Comments: “Our pick is a film that explores the relevance of tradition in today’s world. We are reminded that the exploration of one small subject through documentary film is capable of shedding light on a larger world. There were moments in this film that brought the whole world back to New York – they were uniquely New York moments. It explored themes of politics, culture, aestheticism, desirability, sexuality, and sensuality.”

Jury Comments: “We ultimately chose the winner for its poetic, truthful and unsentimental portrait of an exile’s return home to deal with his father’s death 20 years earlier. The director, Carlos Chahine, portrays the absurdities and contradictions of how we deal with grief through humor, freshness and subtlety.”

Jury Comments: “This touching short artistically combines the aesthetic and the emotional in its portrayal of home and its memories. It tells a post-Hurricane Katrina story in a new, inventive and poignant way.”

Jury Comments: “Technically strong, this film beautifully documents a little known world and introduces audiences to a culture on the verge of extinction. The filmmaker provides a glimpse into a closed sisterhood — proud of their traditions, yet accepting the disappearance of their way of life.”

Jury Comments: “The winning film, a very small yet powerful story, portrays a magical and touching drama of a young girl’s home life. The filmmaker uses minimal storytelling to achieve maximum emotional impact and we commend the terrific performances of the young actors.”

Jury Comments: “This visually delicious film, with its stunningly rich colors, captures the cultural rhythms and unmistakable sounds of the city to artistically portray a sense of poverty in what remains of old Havana and its beauty.”