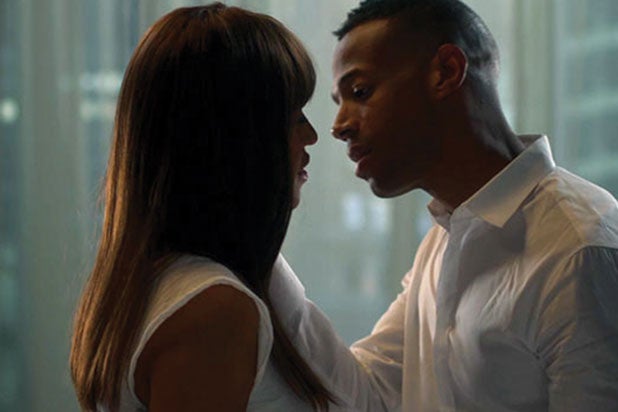 “Fifty Shades of Black,” Marlon Wayans’ spoof of “Fifty Shades of Grey,” is getting clobbered by critics, who gave the comedy a meager 14 percent rating on Rotten Tomatoes.

The film, which grossed $2.2 million at the Friday box office and is looking to make $6 million its opening weekend, follows E. L. James’ “Fifty Shades” plot with the occasional shifts to movies like “Magic Mike” and “Whiplash.” Critics seem to be in consensus that the movie has no business mocking anyone.

“Compared to other recent Wayans efforts, this one at least maintains a sense of focus, slogging through a scene-by-scene re-do of the original movie with only a few departures into other titles. (‘Whiplash’ and ‘Magic Mike,’ if you must know),” TheWrap’s Alonso Duralde wrote in his review. “But we still wind up with a slapdash movie that’s more unbearable than the heavy-breathing best-seller and its emotionally timid screen adaptation, even though the dreadful ‘Fifty Shades of Black’ has the audacity to think it has earned the right to mock the slightly-less-dreadful ‘Fifty Shades of Grey’ phenomenon.”

Below are excerpts from six of the worst reviews.

“‘Fifty Shades Of Black’ has something to offend everyone, including jokes about drugging women’s drinks, jokes about Woody Allen and Bill Cosby unrelated to the roofie joke, Black Lives Matter jokes, white women talking in exaggerated ‘urban’ accents as a joke, and jokes about tricking a blindfolded woman into unprotected sex. And let’s not even talk about poor Jane Seymour‘s racist adoptive mother character.”

“‘Fifty Shades of Black’ is ultimately a crude conceptualization of its zeitgeist-baiting premise. Predictably, the Black Lives Matter movement is mentioned in a throwaway line, and Black’s mother Claire’s (Jane Seymour) mistaken tasing of Hannah ends with her claiming she’s ‘just standing her ground.’ If that weren’t torturous enough, Seymour is given another chance to make a fool of herself in a dinner scene where she imitates speaking Chinese to her adopted, adult daughter, who’s actually Korean, which comes as news to her.”

“Clocking in at 92-minutes, ‘Fifty Shades of Black’ should fly by, but it plods on and on and on as jokes that miss the mark in the first place are dragged out exponentially, the actors sleep walk through the empty steps of ‘Fifty Shades of Grey’ (there’s a ‘torture’ scene where Christian reads to Hannah from the book), and nothing interesting or amusing happens. Ever. There is absolutely nothing to recommend ‘Fifty Shades of Black,’ unless you’re a Marlon Wayans completist. This is super cheap and will probably make enough money that it won’t kill the genre, but goddamn we can hope it does.”

“‘Fifty Shades of Black’ isn’t very good, and it might not even be better than the film it’s sending up. It’s a parody of the dreaded (but sometimes sly and even quietly, intentionally funny) picture made of the even more dreaded amateur-hour fan fiction that inexplicably and disturbingly became a mega-bestseller. It’s spotty and sloppily made, with the kind of patchy editing that sometimes kills yuks that weren’t funny to begin with. And it’s prone to too obvious gags, including ones made by everyone, including your mother, who once texted you that she read the book. A spoof should inspire writers to dream up with gags no one else thought up; no one needs the millionth repeat that its mousy heroine somehow made it to senior year in college without owning a computer.”

“‘Black’ may deliver shot-for-shot jabs at the source material, but I’m not certain. I’ll leave that assignment to some other poor purgatorial soul to suss out the similarities in angles. However, I did note several shots and situations recalling specificities from ‘Grey’ that linger due to the cold cruelty of memory, and only the theater’s cell-phone policy stopped me from dialing my psychotherapist on the spot. Disrupting the experience of other moviegoers with the light of my phone is something I chose not to do, even when it was painfully clear they weren’t laughing at the film as Wayans intended; and it was at that point I realized that profiling the paltry-in-number audience members of a film such as ‘Fifty Shades of Black’ would be a far more compelling and profound subject to write about than the work itself.”

“As a piece of cultural criticism, however, it painstakingly eviscerates nearly every scene in ‘Grey’ and skewers latent sexism, classism and ludicrous sexual innuendoes, as well as the original’s numerous plot holes. But it’s decidedly lowbrow, overlooking how all involved in Sam Taylor-Johnson‘s self-serious James adaptation fancied it as some modern take on Jane Austen.”