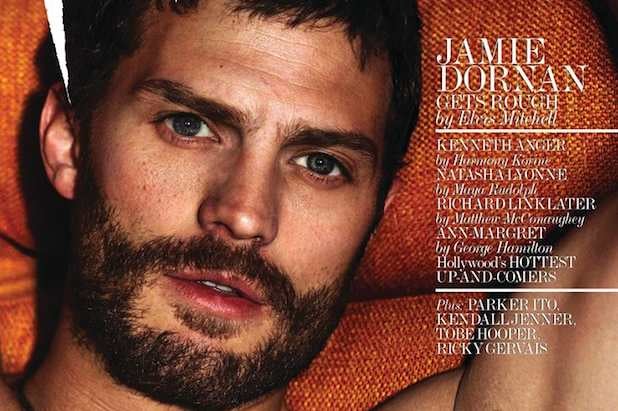 Jamie Dornan made it as a male model before being cast as literary sex icon Christian Grey in the adaption of “Fifty Shades of Grey,” so it might be surprising to some to hear that he doesn’t like what he sees in the mirror all that much.

“I don’t like my physique. Who does?” Dornan said in the cover story of Interview Magazine’s June issue, for which he struck a shirtless pose. “I was a skinny guy growing up, and I still feel like that same skinny kid.”

Dornan, a 32-year-old Irish actor, got his start by acting in Sofia Coppola‘s “Marie Antoinette” in 2006, but his career didn’t start heating up until 2011 when he was cast as Sheriff Graham/The Huntsman on ABC’s “Once Upon a Time.” The problem, he openly admitted, was auditioning.

“I’d been auditioning for parts for years. I never got any better at it. I’m crap at auditions,” Dornan said. “I know there are people who can walk into those rooms and make those lines sing on the page and get the job immediately. I wasn’t one of them. I’m still not one of them.”

See video: ‘Fifty Shades of Grey’ Star Dakota Johnson: Getting Into Anastasia’s Head Can Be ‘Kind of Boring’

“Fifty Shades” will be Dornan’s first major movie role as a leading man following his strong performance as a serial killer on television drama “The Fall.”

When asked if there is a difference in artistic approach for the big and small screen, Dornan maintained good acting is good acting on any size screen, as established movie stars Matthew McConaughey and Woody Harrelson demonstrated earlier this year in HBO drama “True Detective.”

“I’ve just finished watching ‘True Detective,’ but I didn’t watch it thinking that Matthew McConaughey and Woody Harrelson were acting for the small screen. I just thought they were fucking brilliant and giving epic performances,” Dornan said. “I think sometimes actors are drawn to good television because you have more time to sell it, you have more time to shape a character, and to tell a story, and that’s really appealing.”