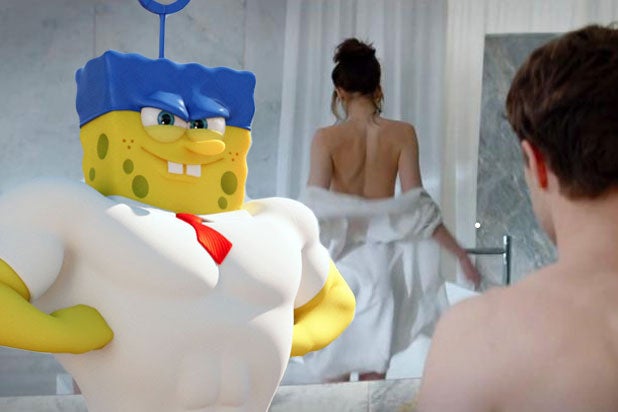 “At the time, there was a woman being slapped, naked, bound up,” explained Deborah Powell, who attended the “Spongebob” movie with at least a dozen children. “So we had to have our children close their eyes. I could see another car behind us that had children in there with their eyes closed.”

The films were shown in the Bay Area at Concord’s West Wind Solano Drive-In. The theater has two screens, one pointing north, the other west. Both are still visible from different viewing points, KTVU reported.

Powell expressed her concern to a theater employee about playing the R-rated film alongside a family-friendly movie.

“He was apologetic. He agreed that it wasn’t appropriate, and that there had been other complaints,” said Powell.

“There is no way to avoid looking at that screen. It’s too tempting. So, we couldn’t stay. We had to turn around. My children were devastated,” Powell said.

Both films have continued to attract moviegoers since their releases, with “Fifty” earning more than $266 million worldwide and “Spongebob” more than $149 million.