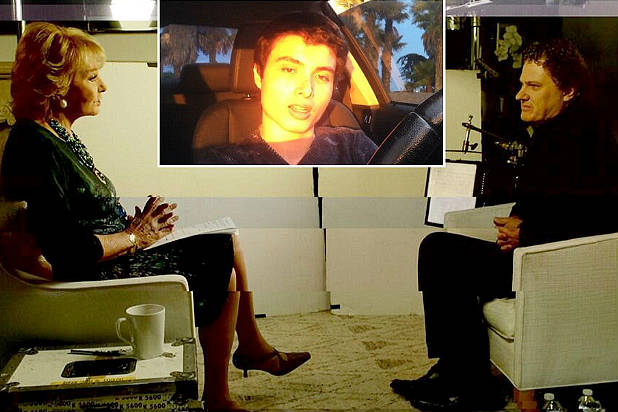 As ABC News prepared to air the first interview with the father of the UC Santa Barbara mass killer, a post on his wife’s Facebook account was promoting his photography.

Elliot Rodger, son of Peter Rodger, killed six and injured 13 more before committing suicide. Peter Rodger, a 2nd Unit Director on “Hunger Games,” will break his silence in an interview Friday on “20/20” with Barbara Walters — who is coming out of her brief retirement to do the interview, at his request.

The post appeared Friday on Peter Rodger’s wife Soumaya Akaaboune’s Facebook page to let her friends know about her husband’s night in the spotlight — and to tell them his “fine art photography” is for sale.

“The post has been removed and she is no longer on Facebook,” Simon Astaire, a friend of the couple, told TheWrap. Astaire declined to answer any further questions including whether Akaaboune wrote the post herself.

“News from us,” said the Facebook message. “Peter will be on ABC with Barbara Walters today on 20/20 talking about the tragedy that hit our lives and hope to make change so that this horrendous event never happens again to innocent lives. We are also selling his fine art photography so if interested or just curious to see his photography and film work go to www.rodgerpictures.com thank you!”

Akaaboune is reportedly from Morocco and the message is also repeated in French.

Peter Rodger has been criticized for his handling of the situation by some relatives of the victims.

Johnny Chen and Jane Wang — whose children George Chen and David Wang were among the first killed — said Peter Rodger is getting too much media attention, and that they are outraged by his “20/20” interview. They said he did not reach out to apologize to them.

“We want to hear some personal condolence and apologize, and this is the minimum they should do,” Chen said.

After being contacted by CBS News, Peter Rodger sent letters of apology to both families.