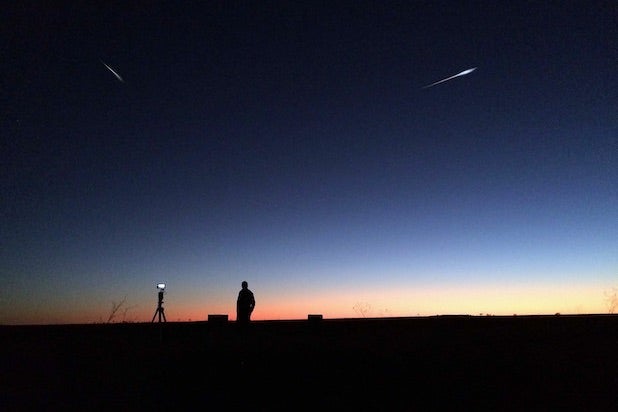 In the world of nonfiction filmmaking, few things are as simultaneously comforting and provocative as the voice of Werner Herzog philosophizing and rhapsodizing about the implications of one thing or another. He’s been doing it for decades now in his documentaries, and in recent years he’s specialized in musings about the wonders of science and the natural world: caves in “Cave of Forgotten Dreams,” volcanoes in “Into the Inferno,” Antarctica in “Encounters at the End of the World.”

Herzog’s new film, “Fireball: Visitors From Darker Worlds,” fits right into that continuum – and like “Into the Inferno,” it’s co-directed with Clive Oppenheimer, a Cambridge professor and scientist who in many ways serves as Herzog’s tour guide into this world. The new film has a bit of the feel of “Werner Herzog’s Greatest Hits” to it, because it goes back into caves and to a volcanic crater and to Antarctica – and more to the point, because it slips right back to that quintessentially Herzogian take on what you might call science-nonfiction, with a healthy helping of mysticism on the side.

If it may be a return to familiar pleasures rather than an excursion into anything new, that’s hardly a problem when those familiar pleasures include Herzog dropping bon mots. Here’s one he unleashes when he shows footage of dogs wandering through the Mexican resort town near the site of the asteroid that ended the reign of the dinosaurs: “The dogs here are too dimwitted to understand that three-quarters of all species were extinguished in this place.”

So this is science delivered with that Herzog twist, and with the help of an array of scientists, mystics, researchers, artists, religious people and sometimes folks who fit into more than one of those categories.

Oppenheimer does most of the interviewing, while Herzog tags along as the cameraman and then supplies his own narration after the fact. “Fireball” starts with Day of the Dead celebrations in Merida, Mexico, near where the asteroid landed some 66 million years ago and where Herzog announces a mission statement of sorts: “Visitors from other worlds have come, and countless others are on their way. They have changed entire landscapes, but also cultures.”

Herzog and Oppenheimer are interested in the landscape changes, to be sure, but they’re more fascinated by the cultural ones – by a meteorite that fell in France in 1492 and in doing so solidified the realm of Maximillian I because it was interpreted as a sign that God approved of his rule; by the “Black Stone” set into the corner of the Kaaba, the holiest site in Islam, which the film says “is almost certainly a meteorite”; and by the Jesuit priest who also happened to be an expert on meteorites, and who was assigned under his vow of obedience to the summer residence of the Pope, which just happened to have an observatory and an extensive collection of meteorites.

The film engages with what it calls the “very powerful and elegant idea that meteorites have meaning,” but it also plays with that idea. When a scientist in India suggests that in certain ways “we are all made of stardust,” Herzog interrupts to assert, “I am not made of stardust! I am a Bavarian!”

But he’s a mystical, artistic Bavarian, and “Fireball” gives him another chance to play in familiar but satisfying territory. “You can’t do science if you don’t have that sense of wonder,” the film declares at one point, and as always Herzog brings the wonder.