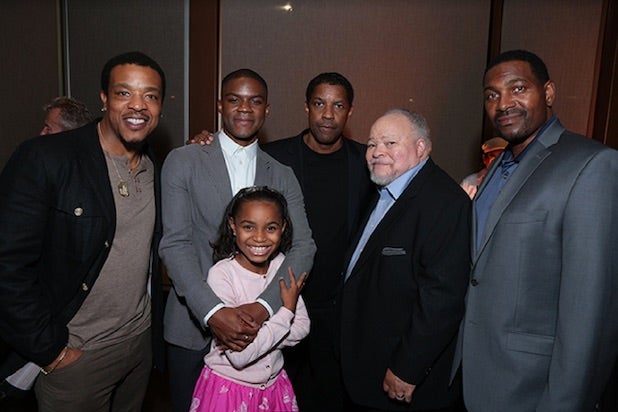 If the reaction of the Screen Actors Guild members who filled nearly 700 seats for the first Los Angeles screening of Denzel Washington’s “Fences” on Saturday night is any indication, Washington, his cast and Paramount Pictures should soon be awash in rave reviews and shiny statuettes.

Naturally it won’t be that easy, but the Saturday screening at the Regent Village Westwood theater was a triumphant bow for director-actor Washington’s adaptation of August Wilson’s family drama, which ran on the Broadway stage in 1987 with James Earl Jones and in a revival with Washington in 2010.

The capacity audience included studio guests, press and Academy members, but the bulk of the crowd consisted of SAG members who waited in a long line that stretched down the street and around the corner.

At times that audience seemed almost disconcerting in its eagerness to love the film, laughing a little too hard at even the slightest joke in the early going and interrupting almost every big speech with applause as the action grew more serious.

But the enthusiasm was undeniably genuine, and it turned to a fevered standing ovation when Washington and six of his castmates took the stage for a post-screening Q&A. Particularly strong applause greeted Viola Davis, actors Mykelti Williamson, Jovan Adepo and Stephen Henderson and, of course, Washington, who directed the film and plays a former Negro League baseball player struggling to make a living in 1950s Pittsburgh.

And while reviews are embargoed until closer to the film’s Christmas Day release, it’s no spoiler to say that Washington and Davis are assured to be in the thick of the Oscar race, as are Williamson, Adepo, Henderson and the film itself.

In fact, the biggest questions that now loom over the film are about number and placement. Will Oscar voters nominate Davis for Best Supporting Actress, the category in which she’s campaigning, or will they think she belongs in Best Actress and nominate her there instead? Will the “Fences” supporting actors split the vote, or can they take two or three of the five slots? And will Washington land nominations for Best Actor, Best Director and Best Picture?

For now, I’m guessing that they opt to put her in supporting, where she’ll win her first Oscar; that Williamson and maybe Adepo land supporting-actor nods; and that Washington probably has two of those three nominations in the bag, with director the only real question mark.

“Denzel makes it easy,” said two-time Oscar nominee (and Emmy winner) Davis in the Q&A. “He said two things to us before we started: The first was ‘remember the love,’ and the second, which is frightening to actors, was ‘trust me.'”

Davis, who won the Tony Award for best actress in the same role even though she’s campaigning for the Oscar in the supporting category, added that Washington also broke her of the conviction that film acting had to be subtler and quieter than stage acting.

“Film acting is supposed to be small,” she said. “But not all emotions are small. When I found out my boyfriend of seven years was cheating on me, that was not a small reaction.”

As the audience roared with laughter, she continued. “August Wilson does not write small.”

“There’s no such thing as film acting,” Washington insisted. “I’m sorry if your acting teachers have taught you differently, but the truth is the truth. And the camera will catch you lying.”

Leon, who worked on every one of the 10 plays August Wilson wrote during his lifetime, said he was particularly struck by the last shot in the film, which pans upward to reveal light coming through a break in the clouds.