First off, I don’t necessarily think expanding the best-picture category to 10 nominees is a bad idea. In fact, I think it might have been a risk worth taking, considering the pressures on the Academy to deliver better ratings and somehow invigorate the Oscars.

But it is a risk – and since it was announced a few months ago, some questions about the whole thing (and its next step, extending preferential voting to the final ballot) have been rattling around in my head.

So here they are: five questions that I think really ought to be asked about the new best-picture process. 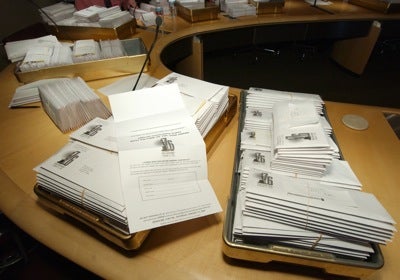 1) Will voters use all ten slots on their ballots?

About 6,000 Academy members will nominate for best picture. They’ll get ballots with 10 blank lines (not five, as in the AMPAS photo at right), and they’ll be asked to name ten candidates, in order of preference.

Will they really fill in all those lines?

I’ve had Academy members tell me that even before the change, they rarely filled out all five slots on their ballots. They’d pick their three favorite films, contemplate those two empty lines, and decide that there really weren’t any more movies that deserved their vote.

Faced with twice as many blank lines, does it make sense that these voters will change their habits? Or will PricewaterhouseCoopers be counting a bunch of half-filled best-picture ballots?

This is a year in which we clearly aren’t going to have 10 slam-dunk, unassailable best-pic contenders, a year in which a few of the nominees will no doubt be derided as undeserving of a nomination. (And yeah, the same thing happens with five nominees. But it’ll happen more with 10.) I have to think that a good number of voters are going to get to the fifth or sixth line on the ballot and decide that they just can’t bring themselves to write down anything else.

Now, there’s no way to predict how many voters will submit incomplete ballots – and no way to tell after the fact, because the accountants certainly won’t tell (unless the Academy asks, in which case they’ll tell them, but not us).

And it wouldn’t be fair to assume that incomplete ballots would somehow invalidate or alter the process.

But still … it makes me wonder.

2) Will we ever see a year in which the films are good enough, and varied enough, to give the Academy the kind of best-picture slate they really want?

Face it: what the Academy wants out of the expanded category is a ballot that includes critical favorites (say, “No Country for Old Men” and “Slumdog Millionaire”), boxoffice champions (“The Dark Knight,” “The Return of the King”), animated films (“Beauty and the Beast,” “Toy Story”), foreign gems (“Pan’s Labyrinth,” “Crouching Tiger, Hidden Dragon”), documentaries (“An Inconvenient Truth,” “The March of the Penguins”), and wonderful little movies (“Juno,” “Little Miss Sunshine”).

They want all of that, or something close to it, in one year. Will they ever get it?

For starters, I think we can agree that they certainly won’t get it this year. I’m pretty sure that everybody inside the Academy knows this, has accepted it, and isn’t particularly happy about it. (“Internally, they’re bemoaning the movies that are being released this year,” says one member.)

But if you look at what’s been released in recent years, at the way the major studios have pretty much ceded any claims to Oscar-level quality to their subsidiaries and the semi-indies, it’s clear that we’ll be lucky to have one year out of 10 with anything like the kind of slate the Academy would like.

But you won’t have 10 great nominees drawn from all facets of moviemaking.

3) Won’t the voters who picked the least-liked movies have unfair clout?

This question speaks to the new preferential system for counting final best-picture ballots. It might get a bit technical. Try to bear with me.

It’s also going to require an example. So, for the purposes of illustration, I’m going to go to the Movie City News website for the Gurus of Gold’s pre-Toronto Oscar predictions. The list looks like this:

Purely for the sake of argument, let’s assume that that is the order of finish when PricewaterhouseCoopers starts to count the final Oscar ballots. (It won’t be, but that’s irrelevant.) And let us also assume that “Invictus” does not have the 50 percent of the vote required to win – because, let’s face it, the chances of any movie getting that many number one votes when you’ve got 10 nominees is pretty damn small.

So, under the preferential system, the accountants need to keep going until one film gets a majority.

They stack the ballots on a table in 10 piles. They pick up the smallest pile – the ballots from voters who liked “A Serious Man” the best – and redistribute those ballots into to the pile of the film ranked second on each ballot.

So if you voted for the least-popular movie, you now have a second chance to elect the best-picture winner. And if those “Serious Man” ballots don’t contain enough second-place votes to push “Invictus” or “Nine” or “The Hurt Locker” over the top (as the probably won’t), then we’ll go to the smallest of the nine remaining piles. Now “Bright Star” voters will have a second chance, as well. Eventually, those accumulating number-two votes will push a film over the 50 percent threshold, and we’ll have a winner.

In other words: if you don’t vote for the winner, it pays to vote for the last-place movie, because that’ll give your ballot more clout.

In most years, I don’t think this’ll make much difference. But think back to 2006, when “Crash” won (narrowly, everybody assumes) over “Brokeback Mountain.” If the system had been in place back then, the first pile of ballots to be redistributed would have belonged either to “Capote,” “Good Night and Good Luck,” or “Munich.”

If “Capote” had finished last, is it silly to assume that a lot more of its voters would have ranked “Brokeback Mountain” second on their ballots? Maybe enough to push it over the top?

4) If it works, will it be expanded into other categories?

If 10 best-picture nominations turns out to give a better picture of the range of good filmmaking … if the best popcorn movies and foreign films and documentaries and animated features do get into the mix … if the ratings go up and everybody seems excited about it … does that mean it’s time for 10 best director nominees?  And 10 best actors?

From what I hear, the question was raised at the board meeting that passed the new rule. Two sources say that Tom Hanks, for one, argued against expanding the best-picture slate because no such expansion was planned in the best-director nominees.

And if you’re using the example of the 1930s and early ‘40s, the way Sid Ganis did when he announced the enlarged best-picture slate, there’s plenty of precedent for expanding other categories. In 1937, for example, there were 12 nominees for art direction, 14 for musical score, 10 for sound recording. The following year, 11 cinematographers got nominations; in 1941 there were 20 for musical score and 10 for short subject (cartoon). In 1942, there were a full 25 nominees for best documentary, four of which received special awards.

Obviously, nobody’s going to push for that – it would, you know, dilute the value of that Oscar nomination. But if you do it in one category, and it works the way you want it to work, how do you justify not doing it in other categories?

5) If it doesn’t work, how long will it take the Academy to go back to the old way of doing things?

So what happens if the expanded best-picture slate yields a lineup of what AMPAS’ Bruce Davis called “10 small, angry movies”? What if it doesn’t appreciably affect Oscar ratings? What if it draws lots of complaints about how all those nominees diminish the value of a Oscar nomination?

If all that happens, would they ditch their grand experiment after one year?

My guess is no – that’d be too quick an admission of defeat. More likely, they’d blame it on a bad year for movies, and try again next year.

And if it yields the same result, pressure would grow. Maybe they’d try again. Maybe not.

Among people I’ve talked to in recent weeks, the over/under on how long the experiment will last seems to be at about three years. Long enough to say that they tried, but that this era in Hollywood doesn’t lend itself to 10 nominations the way the 1930s did.

So, in review, here are the answers to our questions:

Lots more questions will no doubt arise over the next few months.