Florida Governor Ron DeSantis slammed the Walt Disney Company as “woke” at a Thursday rally in Boca Raton, after Disney expressed disapproval of the Parental Rights in Education bill during the company’s shareholders meeting on Wednesday. Fox News Digital exclusively obtained the video.

DeSantis’ swipe against Disney comes just a day after Disney CEO Bob Chapek said that he will be meeting with the Florida Gov. in order to discuss the bill, which prohibits Florida school faculty from discussing sexual orientation or gender identity from kindergarten to third grade. The bill passed the state Senate Tuesday after passing the House last month. DeSantis’ spokesperson, Christina Pushaw, confirmed on Wednesday that the two spoke but said “The governor’s position has not changed.” 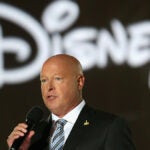 DeSantis doubled down in his Boca Raton speech.

“When you have companies that have made a fortune off being family-friendly and catering to families and young kids,” DeSantis continued. “They should understand that parents of young kids do not want this injected into their kid’s kindergarten classroom.”

“And so in Florida, our policies got to be based on the best interest of Florida citizens, not on the musing of woke corporations,” he finished. 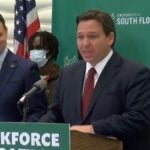 Republicans and DeSantis have defended the bill saying that it only bans “planned lessons” on sexuality, critics have said the bill is designed to stifle conversations about LGBTQ+ youth.

Disney CEO Bob Chapek spoke out against the bill Wednesday in the company’s shareholder meeting for the first time publicly, after facing significant blowback for the company’s previous silence on the bill and an internal memo defending that silence. Chapek also announced that Disney plans to donate $5 million to LGBTQ+ groups.