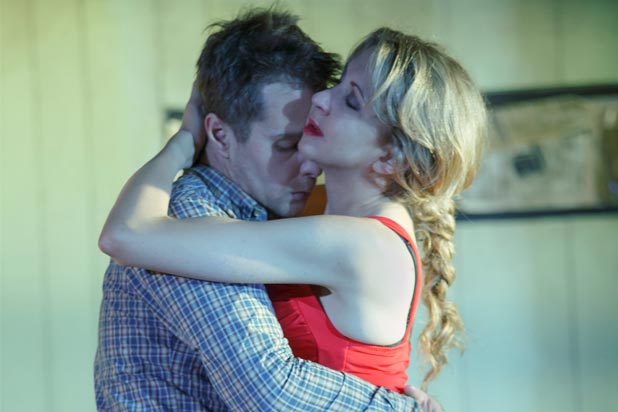 Sam Shepard‘s “Fool for Love,” a finalist for the Pulitzer Prize in 1984, poses a question that most of us never ask: What’s the difference between a man and a guy?

Under Daniel Aukin’s very lopsided direction, the answer to that question doesn’t matter because you won’t be looking at the man Eddie (Sam Rockwell) or the guy Martin (Tom Pelphrey) or even the Old Man (Gordon Joseph Weiss) in the new Broadway revival of “Fool for Love,” which opened Thursday at MTC’s Samuel J. Friedman Theatre.

You’ll be looking at Nina Arianda, who plays the daughter of the Old Man, the girlfriend of Eddie, and the tormented lover of her half-brother Eddie. Imagine the cartoon character Olive Oyl as a baritone in a red tube dress and you’ve got Arianda’s May.

Arianda may be the first actor to feature both arms and legs akimbo, and when she’s not working those long limbs, she’s running around on the set’s motel-room bed like a 3-year-old without her Ritalin. Since May doesn’t get to speak every line of dialogue, Arianda spends the rest of her time on stage messing with her hair, braiding her hair, or pinning up her hair — anything to keep our attention.

The only respite comes when May goes to the bathroom and Eddie tells Martin about having sex with May before he knew they were related (different mothers in different towns but the same father). It’s also around this time that we learn that mere guys get on their hands and knees to tend lawns (Martin’s occupation), while real men lasso chairs in motel rooms (Eddie’s nervous tic). With Arianda offstage, it’s possible to notice Rockwell and Pelphrey, and to see that they’re embodying their respective characters with understated grace.

This is Arianda’s third Broadway outing (after “Born Yesterday” and “Venus in Fur”), and each performance gets bigger and bigger. What’s next? The giant in “Into the Woods”?

There is one moment in “Fool for Love” where she makes her performance more human scale. It’s the monologue that recalls how she and her mother spied on the Old Man’s other family, a story that makes Dad insist that Eddie defend him, as well as all other real men.

Arianda tells the incident with studied calm. Unfortunately, while she’s talking, Aukin changes the color of the lighting (by Justin Townsend) and amplifies Arianda’s voice through an echo chamber (sound design by Ryan Rumery). It’s not only actors who can upstage actors.