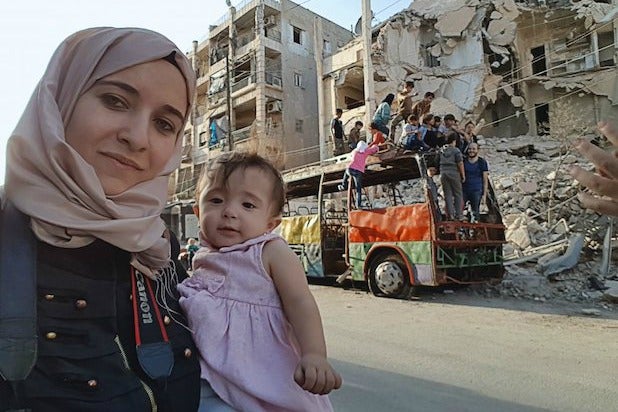 “For Sama,” Waad al-Kateab’s wrenching story of raising a young daughter in war-torn Syria, has been named the best nonfiction film of 2019 at the International Documentary Association’s 35th annual IDA Documentary Awards, which were handed out on Saturday night on the Paramount Pictures lot in Los Angeles.

Al-Kateab, who directed “For Sama” with Edward Watts, also received the IDA Awards Courage Under Fire Award at the ceremony. Last week, the film also won the top award at the British Independent Film Awards, a rarity for a documentary.

Steven Bognar and Julie Reichert received the Best Director Award, the first time the IDA has handed out that particular prize, for their look at the culture clash when a Chinese company took over an American auto glass factory in Ohio in “American Factory.”

Carol Dysinger’s “Learning to Skateboard in a Warzone (If You’re a Girl)” won the award for best short documentary.

“Dokumania” was named the best curated series, “Abstract: The Art of Design” the best episodic series, and “A Moment in Mexico” the best short-form series.

Over the last 20 years, the IDA Awards winner has gone on to be nominated for the Academy Award for Best Documentary Feature 13 times. The same film has won both awards five times in that stretch.

Here is the full list of IDA Awards winners: