Former Secretary of State Hillary Clinton found herself picking up a new skill set from working on her Apple TV+ docuseries “Gutsy,” with her daughter, Chelsea Clinton – how to produce television.

“First of all, I learned how much goes into a production,” Secretary Clinton told TheWrap when she and her daughter spoke with TheWrap earlier this week, and we asked what she learned from the other side of the camera. “I’m used to just walking on the set, sitting down, getting interviewed, getting up and leaving. And we were there from, you know, putting up the lights and getting the camera angles and all that went into producing our interviews, and then the entire docuseries.”

In “Gutsy,” which takes inspiration from the Clinton women’s book of the same name, Secretary Clinton and Chelsea traveled globally, interviewing trailblazers and changemakers, all of whom provide examples of what it means to be a “gutsy” woman. Spanning eight episodes, the show saw them sit down with celebrities like Amy Schumer, Wanda Skyes and Kim Kardashian, as well as women who are helping to enact change like fighting child marriage (which is legal in 44 states), promoting indigenous representation, and foster supportive communities for LGBTQ+ people. 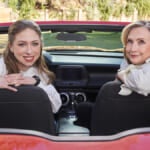 Also Read:
Hillary and Chelsea Clinton Put Out Fires, Rappel Down Cliff Faces and Talk to Celebs in First Trailer for ‘Gutsy’ (Video)

Many of the subjects featured in “Gutsy,” which is streaming in full now, shared deeply personal stories. As any interviewer knows, it isn’t easy to get people to open up, let alone with so many lights, cameras, microphones and crew members around, but Secretary Clinton and Chelsea went into their sit-down interviews with an “intense interest” in speaking to the women.

“It was a combination of our intense interest in these women and their stories. I was so fascinated and curious about how they made tough decisions, how they survived what happened to them,” the secretary said. “And I love hearing people’s stories and, having been in the public eye, I’ve done so much of that outside the public eye. I’ll go into somebody’s house or somebody’s place of business and hear their story. So for me, that part was familiar. But I think what really helped is that we tried to make it clear to them that we were there to hear what they had to share. We weren’t trying to channel them in any direction. We didn’t have any preconceptions. Whatever they wanted to tell us is what we were there to hear.”

Another reason the conversations had an openness to them was time.

“I also had the great luxury, which a lot of people who do interviews don’t, of having a lot of time, so I could follow up, I could explore things, they could ask me questions,” she said. “It was a real give and take, which is different from a lot of the times I’ve been interviewed. And I guess, finally, because we were combining talking with doing, I found it to be a lot of fun. We would be talking one minute and trying to learn how to tango the next minute. I mean, it was just such a good combination of talking and doing and learning and sharing.”

The Clinton women interviewed several pop culture figures in the show, and for those who might be wondering how the secretary is so up on pop culture, they can thank Chelsea.

“Chelsea has been a cultural guide, and it’s an ongoing effort,” Secretary Clinton said with a laugh. 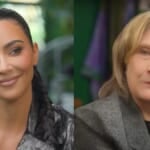