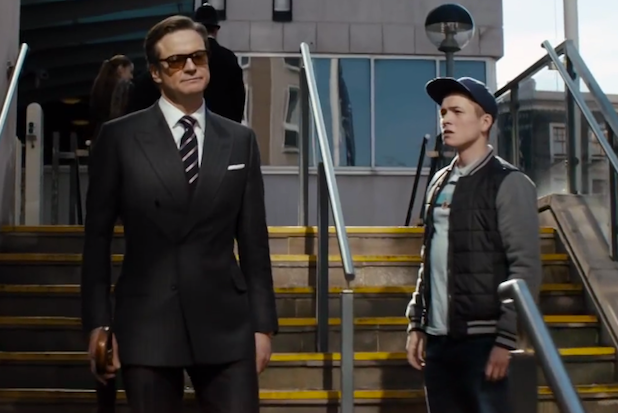 Ian Fleming‘s James Bond books and a plethora of young adult novels have delivered billions of dollars at the box office for Hollywood, but filmmakers at Comic-Con think they can improve upon those meek film adaptations.

“Kingsman: The Secret Service,” an adaptation of Mark Millar’s comic book, is a “spy movie for people who find spy movies just a little bit boring,” Millar told the crowd in Hall H on Friday at the 20th Century Fox panel. Millar lamented the brooding, modern incarnation of Bond, as played by Daniel Craig.

“When Bond kills a guy he cries in the shower about it afterwards,” Millar cracked.

That approach has tickled audiences and critics alike. Sam Mendes’ “Skyfall” earned some of the best reviews in the history of the spy franchise, while Martin Campbell’s “Casino Royale” reinvigorated a franchise dragged down by poor scripts and Pierce Brosnan‘s brogue. Both were major hits.

Millar’s comic book, as well as Matthew Vaughn’s film, are “a love letter to the spy movies we miss.” Vaughn could not attend Comic-Con as he is still in London shooting the movie, but he did offer one fan in the audience the chance to appear in the movie. Here’s the lucky guy:

That same guy, Mike, asked Channing Tatum why he lent his voice to an animated film, Fox and Reel FX’s “Book of Life,” when his primary draw is his physical attractiveness. Christina Applegate joked that he should have asked her that, obligating Mike to assure that she is “hot.”

Awkwardness aside, Tatum picked an unusual movie to launch his career as a voice artist. “Book of Life” is bright, loud and brimming with energy; quite different from what you see out of Pixar or DreamWorks Animation.

Visually inspired by El Dia de Los Muertos — the day of the dead — director Jorge Gutierrez analogized it to a recipe book filled with his family’s stories. while producer Guillermo Del Toro recounted the night Gutierrez pitched him on the project (with a trunk of tequila in tow).

“I’m going to get so stoned before I see this movie,” moderator Ralph Garman told the crowd.

That would be a bad idea before going to see “The Maze Runner,” an adaptation of the first book in James Dashner’s post-apocalyptic young adult franchise. Director Wes Ball got the job thanks in part to a short he made called “Ruin,” but Ball said it was his pitch that set him apart.

He suggested doing something different from the other young adult adaptations out there – something that “has a little more balls.”

The footage suggested a scarier movie than “Divergent” or “The Hunger Games,” in particular one scene in which the protagonist Thomas evades a massive creature (the arachnid-like grievers). It drew loud applause.

When asked about how his character Thomas would respond to Katniss Everdeen, the protagonist from “The Hunger Games,” Dylan O’Brien was less confident in his chance at success.

“I don’t know if Thomas would beat Katniss in a fight,” he said. “She’d take him out with an arrow. He’d run away.”

Balls only get you so far.