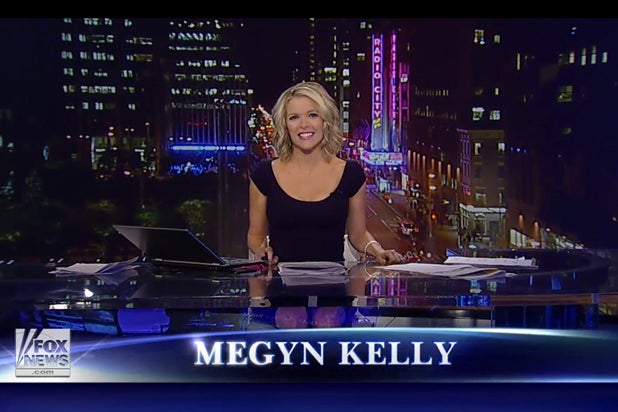 Monday marked the 17th anniversary of the cable news channel that has dominated the ratings for so long that it hasn’t changed its primetime lineup in over a decade.

Shepard Smith and Megyn Kelly, anchoring Fox News’ new shows amid its new schedule, greeted the new era with futuristic new sets, a stated emphasis on journalism and social media and way too much information about Bob Beckel’s sex life.

Fox News unveiled its biggest schedule shakeup in years Monday, showing off its new Shepard Smith-run Fox News Deck (below) and the oft-mocked 55-inch iPad-esque (for the record, they’re believed to be $8,000 Microsoft Perceptive Pixels) tablet desks his team of information specialists used to scour the internet for breaking news.

Smith hosted the new “Shepard Smith Reporting” from the Deck at 3 p.m., where he showed off some of his fancy new tech toys before retiring back into the Deck, on call for any news that may break throughout the day.

There’s a lot of pressure on Kelly to own this timeslot — Fox News has no intention of slipping in the ratings now after years at the top, and Kelly’s show is part of its push to incorporate its news side into its opinion-dominated primetime lineup.

Kelly seemed to relish the challenge. “What’s it like to be the most-hated man in America?” she asked her first guest Ted Cruz, pointing to a poll where the Republican congressman very low favorable rating.

Cruz avoided the questions he didn’t want to answer and stuck to his talking points for several minutes — and Kelly, for the most part, let him do it. She’ll have to challenge politicians more if she wants her program to truly show both sides of an argument, as she claimed on her recent “O’Reilly” appearance.

An interview with the family of the woman shot and killed when she drove her car through White House barriers on Thursday gave a much better sense of the news-rather-than-opinion take the show will have on the day’s events.

And then things got weird. The cast of “The Five” showed up to greet Kelly (sans Greg Gutfeld, probably because he was taping Tuesday morning’s “Red Eye”) and discuss Miley Cyrus, which lead to a discussion about Bob Beckel’s sex life (“sex over 40 gets better and he has a lot of it,” reports Andrea Tantaros) and Kimberly Guilfoyle’s colonoscopy (“you have to do it, it’s for your own health,” Kelly said) and Kelly’s “beached whale” moment while she was giving birth to her son, among other things.

A later segment let Kelly do what the former litigator has always felt most comfortable with: report on legal matters. “Kelly’s Court” looked at what possible case the man who was run over by an SUV driving away from a gang of motorcycles might have against the driver, with lawyers representing either side of the argument.

Also read: Fox News’ ‘The Five’ on Miley Cyrus: ‘That Was a Cheerleading Squad for Hookers’

Kelly finished the show urging viewers to tweet at her, telling them she planned to incorporate a lot of social media into the show (she even found time to tweet during a commercial break). That’s a big part of what Smith is doing as well.

It’s an experimental time for a network that hasn’t had to try anything new in years. Roger Ailes has said he’s certain Fox News is on the cutting edge of how news will be delivered in the digital age. Then again, he also told TVWeek in 2005 that CNN’s then-new TV screen walls on “The Situation Room” showed CNN had given up on “getting the ratings with their programming, so they’ve decided to get the ratings with their walls.”

In the end, Fox News’ ratings will show if its audience is turned off by change or if it’s ready to try something new — something it hasn’t had to do in a long time.

Watch Shepard Smith’s tour of the Fox News Deck and a clip from the “Kelly File”: