Buried in the depths of the early morning 3 a.m. hour lies a Fox News show that is consistently besting shows on competing networks in daytime and even primetime timeslots in the choice 25-54 demographic.

“Red Eye With Greg Gutfeld” finished September ranked 21 out of all cable news shows in the prime 25-54 demo — above CNN’s flagship primetime show “Piers Morgan Live” and well above the channel’s much-hyped Zucker-era offerings. It steadily beats plenty of MSNBC shows, too.

Meanwhile, since the show launched in February 2007, Gutfeld has become possibly the hardest-working man at Fox News, between “Red Eye,” “The Five” and occasionally segments on or substitute hosting gigs for “The O’Reilly Factor.”

TheWrap sat down with Gutfeld and his co-hosts Bill Schulz and Andy Levy just before a taping of an episode.

What’s the secret of the show’s success?

Gutfield: We are the most unlike any show around, and it’s because we’re unprofessional; we really didn’t know what we were doing. And we’re not boring. That show is never boring. You could hate it, you could be confused by it, but it’s never boring.

Schulz: The other thing to remember is, it’s a panel show. And what that is, it’s essentially people sitting around a panel talking about the news of the day. Cable has not seen something like this.

Levy: When we first started it was like, “Oh, this is the conservative ‘Daily Show,'” which it never was and was never intended to be. We don’t have writers. The three of us and our producers, we write the whole show, we do everything ourselves, and I think that comes across. Nothing feels fake or forced.

Also read: Fox News’ ‘The Five’ on Miley Cyrus: ‘That Was a Cheerleading Squad for Hookers’

After over 1,400 episodes and 80 months together, your chummy chemistry easily comes across on the show — as does the teasing. Rarely a show goes by where Gutfeld’s height — or lack thereof — Levy’s love of cats over people and Schulz’s drug use and homelessness aren’t mentioned…
Levy: We poke fun at ourselves and at each other, which is kind of a rare commodity. Piers Morgan is not gonna handle people joking about him very well, and he’s certainly not going to poke fun at himself. But none of us have that sort of pomposity.

Gutfeld: The best thing that happens on “Red Eye” – and it happens rarely – is when there’s a guest on who doesn’t watch the show and tries to like criticize us as if we’ve never been criticized before. Like, “I’m coming on Fox and I’m gonna make fun of you.” Dude, you don’t even know what we do to each other on this show, so shut up.

Levy: I think fans respond to that, they see that we’re just sorta like – I hate to use the word – but we’re just like normal people because that’s sort of pompous itself.

So, who is watching your show at 3 in the morning?
Schulz: My mom, every night.

Two.
Gutfeld: And I’m watching your mom every night.

Gutfeld: People’s parents watch, and then they get their kids hooked on it or vice-versa. I learned this when I did a book tour and it was so many “Red Eye” fans and there were families. That sounds like a totally made up thing – and “there were families” – but they are! They are! Sometimes it’s grandparents. People who are up late at night. What we always get are breastfeeders. A lot of breastfeeders. Lot of women, too. Breastfeeders, elderly, students … maybe the only people you don’t get are people that have to get up really early. Those people. 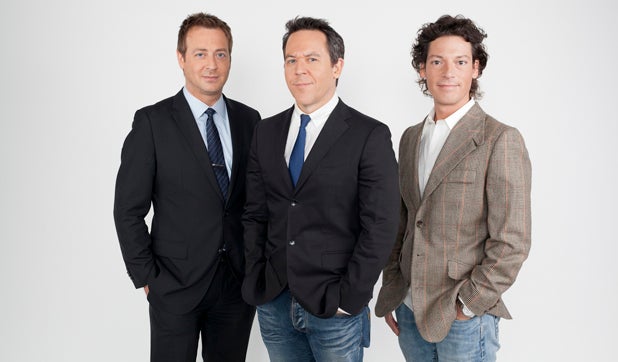 From left:  Levy, Gutfeld and Schulz

The show premiered to little fanfare, after a haphazard process you, Greg, likened earlier to “putting together a sandwich when you’re drunk late at night” and a scant week of rehearsal time.
Levy: They very smartly did what they call a “soft launch.”

Gutfeld: They didn’t tell anyone! We still consider this whole 80 months a soft launch.

What can’t you joke about?
Gutfeld: We understand that where there is sacrifice and injury and death, you just shut up. A show is nowhere near as important as the suffering of a family … I always think about what happens if a victim of a crime turns on the TV while we’re sitting there and we’re cracking wise about the event. That just would make me sick.

What does the media do that’s most ripe for your mockage?
Gutfeld: I find it funny on Twitter watching people in the media tweet about a popular thing. Popular things don’t need help. Anderson Cooper tweeted something about getting ready to watch “Breaking Bad” or something like that, and I think I tweeted “who cares?” Why don’t you talk about something that could use some help? But that’s a minor thing.

I guess it’s the predictability, cheap-like mentality. I mean, if you want to look at a good media comparison I guess you could look at the recent talkathon with Ted Cruz and compare that to the woman in Texas — Wendy Davis. Both got equal amounts of time, but the tone was vastly different. If you said anything bad about Davis, who’s fighting for women’s rights, you’re sexist. But Cruz is just some guy you can make fun of. I guess our issue with the media is we can pretty much predict what’s gonna happen.

Gutfeld: I wish they were biased in a more interesting way, like [radio host] Alex Jones. That’s a joke. His bias is insane.

How much longer do you expect this to go?
Gutfeld: We are a very successful bar band that everybody goes to see but is not a big name. We don’t fill up stadiums, but we could probably do this forever because we’ve done it together forever. And everybody has fun and it’s late at night, and everybody gets drunk.

Levy: About where the Bacon Brothers are.