Fox News’ Greg Gutfeld on Tuesday joked that his colleague Peter Doocy kind of deserved being called a “stupid son of a bitch” by President Joe Biden on Monday.

The panel of the highly rated afternoon program was discussing the incident, which happened after Doocy asked Biden whether inflation would hurt him and his party going into the midterms and the president said, “No, it’s a great asset. More inflation. What a stupid son of a bitch.” 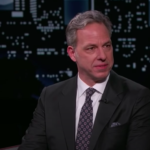 Per Doocy, Biden did call him later to apologize.

Gutfeld also insisted Fox News was handling the situation better than CNN would have and compared how he found the moment “hilarious” to “every time [Jim] Acosta acted like a stone tool and got CNN’s cavalcade of Karens fretting about the coming reign of terror” during former President Donald Trump’s administration. Fox News, it should be noted, supported Acosta when his White House press pass was briefly revoked during that era.

On Monday night, CNN’s Jake Tapper also defended Doocy, telling a late-night host Jimmy Kimmel — who was amused by Biden’s remarks — that the comments were inappropriate from any leader.

Watch Gutfeld below, via Fox News.