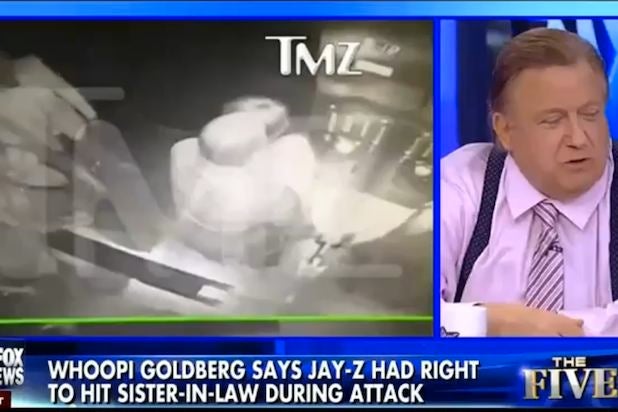 Bob Beckel, the resident wild card on Fox News talk show “The Five,” agreed with Whoopi Goldberg that Jay Z could have hit Solange Knowles back during their elevator fight, and even revealed he had to punch a woman to save his life, once.

“I got bit by a woman right in the collar bone and she wouldn’t let go so I had to punch her,” Beckel said on Thursday. “It was the only way I could get her off, otherwise I was going to die. It was crazy.”

Although the conversation surrounding Goldberg’s position began with a guest co-host “kind of” agreeing with it, co-host Andrea Tantaro questioned his “horrible” admission.

“So you hit a woman? Why would you ever admit that?” Tantaro said. “That’s horrible.”

Co-host Eric Bolling also could not agree with Goldberg and Beckel’s rules of engagement.

“No way,” Bolling said. “My momma taught me there is never, ever a reason to raise your hand to a woman, no matter what, even if she’s beating on you.”