Frank Bonner, the actor who played radio-station sales manager Herb Tarlek on “WKRP in Cincinnati” died on Wednesday, his friend and former co-star Gary Sandy has confirmed. He was 79.

“It Is True!” Sandy posted to Facebook. “RIP My Great Friend!!!” 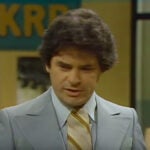 “WKRP in Cincinnati” aired from 1978 to 1982, with Bonner starring on all four seasons as the brash and ineffectual sales manager Herb Tarlek. The rest of the cast on the ensemble sitcom included Sandy, Howard Hesseman, Gordon Jump, Loni Anderson, Tim Reid, Jan Smithers and Richard Sanders.

The show returned as “The New WKRP in Cincinnati” in the early ’90s, and Bonner returned to reprise his role. Between the two iterations, Bonner played Father Robert Hargis in the “Growing Pains” spinoff series “Just the Ten of Us.”

After early the “WKRP” comeback ended, Bonner did a few TNBC series, appearing in multiple episodes of “Saved by the Bell: The New Class” and one “City Guys.”

Bonner also worked as a TV director throughout his career, helming multiple episodes of shows including “Harry and the Hendersons,” “Saved by the Bell: The New Class” and “USA High.”