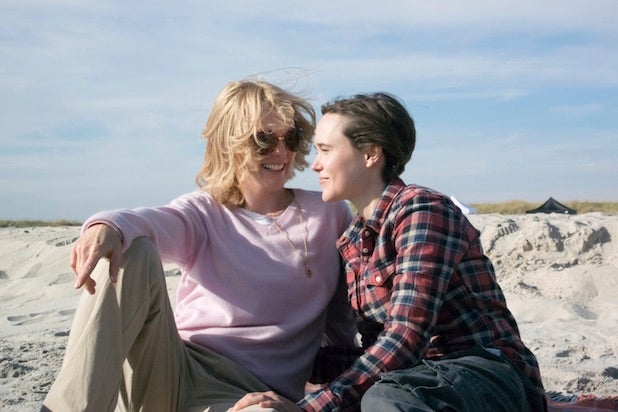 It made perfect sense that moviegoers at the Toronto Film Festival world premiere of “Freeheld” on Sunday night were handed packets of tissues as they walked into Roy Thomson Hall. After all, a movie about a gay couple fighting for pension rights after one of them is diagnosed with terminal cancer is all-but-guaranteed to tug at both the heartstrings and the tear ducts.

But “Freeheld” is far from being a downer. On Sunday night, it came across as almost triumphant, thanks partly to the work of two actresses, Julianne Moore and Ellen Page, and partly to the work of the five Supreme Court justices who two months ago ruled that the U.S. Constitution protected same-sex couples’ right to marry.

Based on a true case in New Jersey less than a decade ago, when the fight for pension benefits for domestic partners was a first step and gay marriage a pipe dream, “Freeheld” came across as a clear reminder of how quickly and how dramatically things can change. And the recent Supreme Court decision didn’t make the film feel like a musty period piece — instead, it seemed to add resonance and immediacy, turning a small victory in one community into the harbinger of greater things to come.

The film, directed by Peter Sollett, is based on the 2007 Oscar-winning short documentary by Cynthia Wade. She followed New Jersey police officer Laurel Hester, a 23-year veteran of the force, who was diagnosed with cancer and wanted to pass her pension along to her domestic partner, Stacie Andree, before she died. The move was permissible under state law, but the Ocean County Freeholders, a five-person elected board that makes decisions in the county, ruled against her in a case that received national attention.

The fight to put enough public pressure on the board to get them to reverse their decision drives Sollett’s “Freeheld,” though the film also spends lots of time on the relationship between Laurel and Stacie. Those scenes feel fairly schematic, though Moore and Page are winning enough actresses to make even routine scenes watchable.

(They’re also the best hopes for the film come awards time — particularly reigning Best Actress Moore, who has the showier role and, as always, nails it.)

The tone changes dramatically after Laurel’s diagnosis, though it then takes another shift when Steve Carell enters as a flamboyant gay activist who organized protests against the Freeholders’ decision. Carell’s over-the-top performance is so funny that it’s hard to be too annoyed by it, but while he does energize the movie it’s a jarring change in a film that doesn’t need quite so much comic relief.

In the end, Wade’s documentary is the essential cinematic document of Laurel Hester’s fight for equality. But Sollett’s “Freeheld” is an honorable and touching attempt to present that story to a wider audience. It isn’t a great movie, but it’s a great story told with affection and heart.