Warning: This post contains MAJOR spoilers from “Friends: The Reunion.” Read on at your own risk!

After 10 seasons of watching them play Ross and Rachel, the most iconic on-again-off-again couple on television, it was easy for “Friends” fans to hope that Jennifer Aniston and David Schwimmer were a couple off-screen too. And, as it turns out, they almost were.

During the sitdown interview portion of the “Friends: The Reunion” special, James Corden couldn’t resist asking if there were any real romances between the cast, given how young and attractive they all were. At that, Aniston turned things over to Schwimmer directly.

“The first season, I had a major crush on Jen,” Schwimmer revealed, with Aniston noting that it was mutual.

But, according to Ben Winston, who directed the reunion, that confession wasn’t always part of the plan for this reunion. He sure hoped for it though.

“The thing with David and Jen — in one of the conversations I had with David in the last year, he had mentioned it to me. And I was like, ‘Well, would you be prepared to talk about it on the show?’ And he was like, ‘I don’t know. Let’s just see how we go.’ So I did know of it. So, the question was put in there hoping that they would answer it,” Winston told TheWrap. “You could see there was a moment when they almost looked at each other as if to say, ‘Are we going to answer this or not?’ So that was great that they were able to share that because that was something that I don’t think they’ve ever spoken about, even to the castmates, let alone to the public.”

That said, the actors confirmed that they never actually did anything about those feelings — mostly because one or the other was always in a relationship.

“At some point, we were both crushing hard on each other, but it was like two ships passing because one of us was always in a relationship,” Schwimmer added. “And we never crossed that boundary.”

Unfortunately, their first kiss went down exactly the way Aniston hoped it wouldn’t: on screen.

“Honestly, I remember saying one time, to David, ‘It’s gonna be such a bummer if the first time you and I actually kiss is gonna be on national television,'” Aniston said. “Sure enough! First time we kissed was in that coffee shop.” 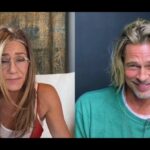 And no, the actors weren’t subtle about their feelings for each other. According to the pair, they would spoon and fall asleep on the couch while on breaks during filming.

Ultimately, just like Monica called out Ross and Rachel’s flirting at the beach house in Montauk, Courteney Cox confirmed that she and the rest of the cast definitely knew about Aniston and Schwimmer’s feelings for each other. But Cox also voiced her support for the restraint of her co-stars.

“How great though, ultimately, because if you had and it didn’t work out, it would not have been, probably, as great,” Cox said.

To that, both Schwimmer and Aniston agreed. In the end, the pair simply played out their feelings on-screen as best they could, which is why Ross and Rachel felt so real.

“We just channeled all of our adoration and love for each other into Ross and Rachel,” Aniston said.