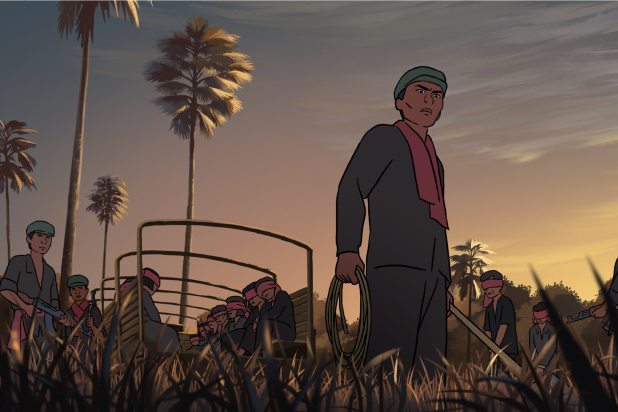 There’s no sensationalism in Denis Do’s “Funan,” a harrowing animated drama about a family struggling to survive the Khmer Rouge revolution in Cambodia in the late 1970s. It’s a film about dulling the senses and stripping away, at gunpoint, the will to fight. It’s a film about holding onto hope without any sentimentalism to encourage you. It’s a film of pain, and it’s beautifully depressing.

“Funan” features the voices of Bérénice Bejo and Louis Garrel (who previously co-starred in “Godard Mon Amour”) as Chou and Khuon, Cambodian parents of a three-year-old named Sovanh. Their lives seem perfect for all of a minute before the revolution begins; once that happens, they are driven from their homes and — after Sovanh toddles away from them in a caravan — forced into a separate labor camp from their child.

Malnourished, worked to the bone, and subject to brainwashing every day, Chou and Khuon try to find some way to reach their child. Escape is deadly; there’s no bureaucracy to appeal to. They can ask their gun-toting guards but all they ever hear is that if they work hard enough… maybe.

Also Read: 'Your Name' Director Makoto Shinkai's 'Weathering With You' Acquired by GKIDS

“Funan” isn’t about an all-or-nothing escape attempt, or wrestling the firearms away from the oppressors and rescuing the all the prisoners. It’s easy to fantasize about the heroic feats one might pull when the horrors come knocking at your door, and Do has an uncanny ability to strip the audience of any such thoughts. “Funan” evokes the grim drudgery of time amidst a landscape of total subjugation. The daily grind wears away at Chou and Khuon, who never give up hope but gradually lose the fire in their eyes. When survival and freedom are mutually exclusive, soul-crushing choices have to be made.

Do’s film shuns overt stylization, and it’s an ironically evocative decision. The infinite malleability of animation is limited here to a mostly muted color palette, and camera angles and framing that would have been entirely possible within the real world. The style perfectly represents the substance: Restrained, depressed, and yet always expressing its humanity. In the elegant lines that make up Chou’s face, we see the weariness, the bitterness, the light that’s gradually lost.

“Funan” is a France-Luxembourg-Belgium co-production, starring French actors as Cambodian people, and the disconnect is striking. It’s no less disturbing to see people in every other country speak English in American movies, but it’s no better either, and it’s frustrating that — as refined and sensitive as Bejo and Garrel’s performances are — this distinctly Cambodian story is being told through non-Cambodian actors, even though director Do is clearly telling a deeply personal tale, inspired by his own mother’s life.

See Photos: A Timeline of Stop-Motion Animation History, From 'A Trip to the Moon' to 'Missing Link'

It’s an overwhelmingly impressive debut directorial feature, regardless. Do demonstrates a masterful amount of restraint, and his narrative minimalism maximizes the emotional and intellectual power of the story. Clearly told and skillfully illustrated, “Funan” pulls the viewer into a world we’d certainly rather not visit, and no amount of inviting line work can make it comforting. The director translates the overwhelming concept of genocide into intimate, daily struggles, and the horror is indisputable, and inescapable; if you ever thought such a historical horror was “unthinkable,” you’ll think again.