Created and written by Darcy Fowler, Seth Kirschner and Kieran Valla, the series centers on a reluctant mother who was impregnated by the devil 13 years ago and is now attempting to live an ordinary life in Delaware with her Antichrist daughter. However, she’s constantly thwarted by monstrous forces, including Satan, who yearns for custody of his daughter’s soul.

Danny DeVito will lend his voice to the series as the devil, with Aubrey Plaza voicing the mother. DeVito’s real-life daughter, Lucy DeVito, will voice their daughter. 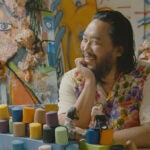 In addition to starring, Plaza will also serve as an executive producer along with Fowler, Kirschner and Valla. Additional executive producers on the series include Dan Harmon; Jake, Lucy and Danny DeVito of Jersey Films 2nd Avenue; and Monica Mitchell, Corey Campodonico and Alex Bulkley of ShadowMachine. Steve Levy serves as a producer on the project.