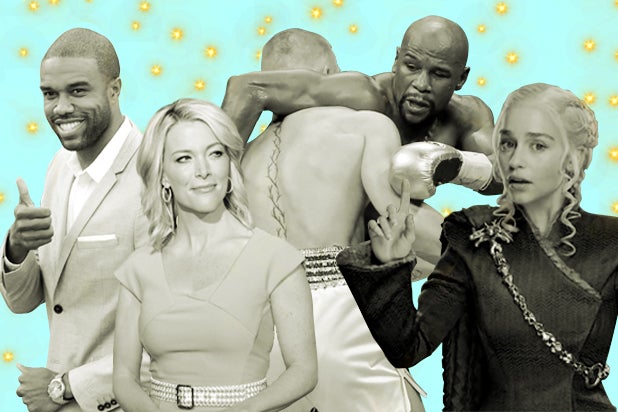 But that was just a movie character named Gloria Clemente, who was played masterfully by Rosie Perez in 1992’s “White Men Can’t Jump.” Aside from those massive “Jeopardy!” winnings (“What is a Quahog?”), what does she know anyway? Plus, we’re talking about TV here, where when you win, you win. And when you lose, well, just ask ABC.

TheWrap digged through the data (and relied heavy on circumstantial observation) to come up with Summer 2017’s nine small-screen winners and losers. Check out our list and reasons below.

Winner: The Actual Winner
Our first winner is an easy one, as NBC was the No. 1 broadcast network for another summer in Nielsen’s TV ratings — its seventh in a row for the key 18-49 demo, and third among total viewers.

Along the way, NBC launched a new legit hit in “World of Dance,” which proved a terrific partner for summer crown jewel “America’s Got Talent.” Expect those two to dominate together for years to come.

But don’t worry for NBC when the leaves change color: “This Is Us” will be back, and “Sunday Night Football” is set to again be the biggest show of the season. Plus, the Peacock’s got a killer combination coming up in 2018: Super Bowl LII and a little TV show called the Winter Olympics. Good luck, everyone else.

Loser: Every Rose Has Its Thorn(s)
There was very little love surrounding the “Bachelor” franchise this summer.

First up, Rachel Lindsay’s “Bachelorette” finale slipped double digits in ratings from the prior year’s version. Then there was the ugly “Bachelor in Paradise” sex scandal, when Corinne Olympios called herself a “victim” after a sexual encounter with DeMario Jackson. A tone-deaf promo ahead of the show’s return didn’t help fans forget the controversy and hop back on board.

Finally, the ABC franchise finished the summer with an unpopular choice for its next “Bachelor.” Peter Kraus was RIGHT THERE, you guys.

Winner: Cup a Joe
And Joe and Mika thought a May engagement would be the highlight of their year…

Perhaps no one on television has directly benefitted more from the President Trump era than MSNBC’s morning show, “Morning Joe.” Joe Scarborough and Mika Brzezinski have become NBCU’s new “Must-See TV,” generally spending their weekday mornings shredding the hapless White House administration from 6 a.m. (or 5, if you’re into “First Look”) to 9.

These months, it’s the rare day one wakes up, checks the Twitter trends and doesn’t see “Morning Joe” among the Top 10. So yeah, good summer guys.

Loser: Keep Your Pants on, Fox
This has been a summer to forget for Fox’s cable networks, and it would have been even worse if Bill O’Reilly had made it to the warmer months.

Additionally, Fox Business Network’s Charles Payne was suspended from July 6 through Sept. 8 as the company investigated sexual harassment allegations into yet another on-air personality. Considering he returned, it stands to reason that Payne was cleared behind-close-doors of the former guest’s behind-closed-doors accusations.

Also Read: Why NBC Will Win Its 7th Straight Summer in TV Ratings

The HBO juggernaut’s second-to-last season, which signed off last month, was rewarded with widespread praise and numerous series highs in ratings. No dragons were circling here.

Alas, things didn’t entirely go off without a hitch, as hackers informed the network in July that they had breached its system. When HBO declined to heed the $6 million-plus ransom demand, the thieves leaked details and scripts for then-unaired “Thrones” episodes, along with other company information.

But given the massive viewership despite the leaks for the show based on George R.R. Martin’s books, HBO appears to have made the right call in its refusal to kowtow.

Loser: The Worldwide Leader in Bad PR
ESPN continued to see its power diminish this summer, as the network shed hundreds of thousands of subscribers as it continues to be hit hard by cord-cutting. Parent company Disney announced an ESPN-branded streaming service to stem the bleeding, but that won’t launch until next year.

If that wasn’t bad enough, the cable giant was accused of mishandling a tweet by “SportsCenter” anchor Jemele Hill, turning it into a national story that even prompted the White House to call for her firing.

Adding to the hits: ESPN radio host Ryen Russillo was suspended and forced to pay $250 after wandering into the wrong Wyoming hotel room while drunk, and the network pulled announcer Robert Lee off of a University of Virginia telecast following the protests in Charlottesville. Because, you know, same name as Robert E. Lee.

Winner: “Seacrest, In!” (Everything)
It was a good time to be Ryan Seacrest, as if there’s ever a bad time to be the wildly prolific multi-hyphenate.

In addition to scoring solid ratings on “Live” after landing the coveted co-hosting gig opposite Kelly Ripa, he finalized his deal in July to return as the face of “American Idol,” picking up a substantial payday for ABC’s reboot ahead of its likely 2018 launch.

The always-busy Seacrest also continues to launch new properties in the polarizing Kardashian empire (yes, he has an EP credit on this summer’s E! unscripted series “Life of Kylie”), and he still hosts his morning radio show, thanks in part to ABC building him his own radio studio to cut down on his commute.

Loser: Not Quite “60 Minutes”
Maybe Megyn Kelly’s fans all spent the summer camping and away from TV access?

The Fox News alum launched “Sunday Night With Megyn Kelly” in June, and despite a hot start thanks to star guest Russian President Vladimir Putin, her primetime talker’s ratings were unimpressive, as the show often had trouble topping reruns of CBS’ venerable “60 Minutes.”

Given that she takes over for the third hour of “Today” in the fall, NBC brass are presumably holding their breath that Kelly is just taking a little time to find her audience.

Winner: It’s Showtime!
Floyd Mayweather’s final bout might not have been his most impressive, but it was certainly a big win for the premium cable network behind it.

Showtime’s telecast of the highly anticipated match between the undefeated boxer and UFC standout Conor McGregor is expected to have broken pay-per-view records, with final numbers still to come. Plus, despite concern from fans that the seemingly uneven matchup would be a snooze-fest, the fight actually didn’t suck.

It wasn’t just fisticuffs that gave Showtime a boost. “Twin Peaks” was back in all its head-scratching glory, with the return to Washington bringing solid ratings and plenty of watercooler buzz.

Did we miss anyone of consequence? What’d we get wrong? Let us know in the comments section.