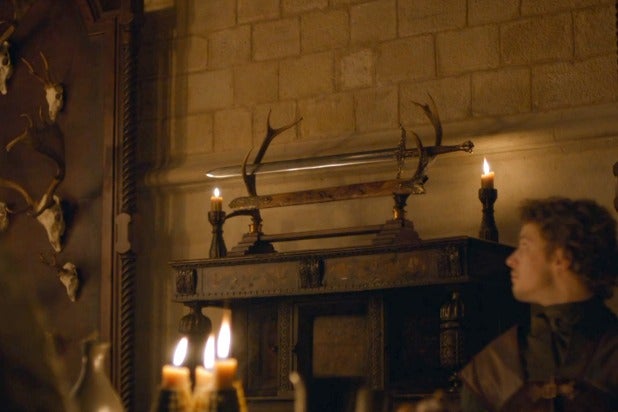 (Spoiler Alert: some plot details from the Aug. 6 episode of “Game of Thrones” are below.)

As war with the White Walkers looms on the horizon, one particular type of weapon is becoming increasingly important: Valyrian steel swords.

That’s because there are only two ways to kill a White Walker, with a dragonglass dagger or a Valyrian steel blade. In the present day of “Game of Thrones,” nobody knows how to create new Valyrian steel, since that knowledge went up in smoke with the rest of Valyria when it was destroyed in the Doom hundreds of years ago.

Thus, Valyrian steel is an incredibly rare commodity and swords made from it are going to play a key role in the future of Westeros and the rest of the world. And that means keeping track of the few Valyrian steel swords that are already in play is going to be a big deal as well. It’s worth noting, also, that even though the methods by which Valyrian steel is created has been lost, that doesn’t mean it they will stay lost. More on that later.

Also Read: “Game of Thrones” 101: Everything You Need To Know About the Order of the Maesters

With that in mind, let’s take a look at the Valyrian steel swords we’ve seen so far on the show, as well as those swords that have been referenced in the books that could also make an appearance at some point.

-Heartsbane. We met House Tarly’s ancestral sword this week in Sunday night’s episode “Blood of My Blood,” as it hung on the wall above the mantel at the Tarly castle Horn Hill. When Sam, Gilly and baby Sam left the castle in the episode, Sam made sure to grab Heartsbane on the way out the door.

-Longclaw. This is Jon Snow’s sword, given to him by former Night’s Watch lord commander Jeor Mormont. Jon has already put Longclaw to good use, killing a White Walker with it in the Battle of Hardhome in season 5. Longclaw is still in Jon Snow’s possession.

Also Read: 21 Big “Game of Thrones” Fan Theories for Season 7 and Beyond

-Ice. The ancestral greatsword of House Stark. Though humanity has lost the knowledge of how to forge a Valyrian steel sword from scratch, a few men remain who are able to reforge new Valyrian steel swords from existing ones. In season 4, Tywin Lannister had Ice, taken from Ned Stark, melted down so as to forge two Valyrian steel longswords for House Lannister.

-Oathkeeper. One of the two Valyrian steel swords forged from Ice. Tywin gave Oathkeeper to his son Jaime, who then gave it to Brienne of Tarth. Brienne still carries it.

-Widow’s Wail. The other sword forged from Ice. Tywin gave this one to Joffrey as a wedding gift, but after Joffrey died the sword passed to his younger brother Tommen. In Season 7, Jaime Lannister carried the sword into battle when he led the Lannister armies. Lady Olenna noted he had the sword with him at Highgarden.

-Tyrion Lannister’s dagger, which was used by the assassin that attempted to kill Bran Stark in season 1. Not a sword, no. It originally belonged to Littlefinger, who lost it to Tyrion in a bet. Then Tyrion lost it, apparently because his sister Cersei stole it and gave it to the previously mentioned hired assassin to finish off Bran before he could awake from his coma — a coma that Jaime had put him in after Bran saw Jaime and Cersei having sex in Winterfell. The dagger was then in possession of Catelyn Stark, who brought it to King’s Landing and discussed it with Littlefinger. Apparently he got it back from her, and in Season 7, he gave the dagger to Bran Stark. After that, Bran gave it to Arya, who currently carries it.

These are all the Valyrian steel swords we’ve seen on “Game of Thrones” so far — at least that we know of. But they’re hardly the only ones around. These blades are rare, but there are reportedly hundreds of them still in existence even so. And there are several referenced in the “Song of Ice and Fire” novels that could come into play. These include a pair of House Targaryen swords, Blackfyre and Lost Sister, which were lost during the Blackfyre Rebellions long ago, and Brightroar, the ancestral sword of House Lannister. House Corbray also has an ancestral Valyrian steel sword called Lady Forlorn — we met a member of House Corbray in season 4, Vance Corbray, at the Vale as House Corbray is pledged to House Arryn.

There are other Valyrian steel weapons mentioned in the novels, but they belong to characters who haven’t appeared on the show, so they probably won’t factor into this.

It is possible that the means to forge new Valyrian steel will become available to our heroes at some point. Though we don’t really know how Valyrian steel is made, some legends in the novels say its forged from dragonfire and magic — both of which are returning to the world in the present day. Daenerys’ dragons may provide the means to crafting new Valyrian steel weapons, and it could be that Bran Stark’s visions of the past could unlock the technique. But that, really, is just speculation.