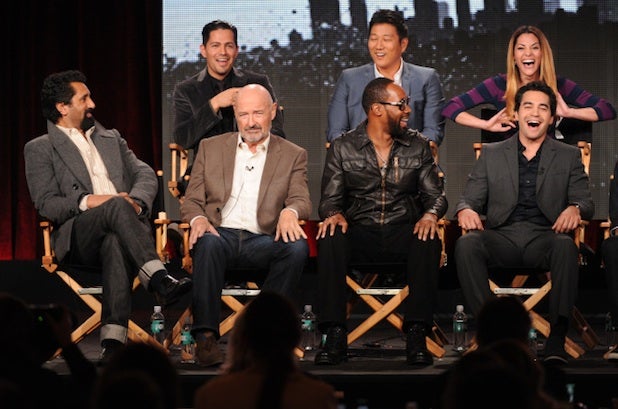 The crime drama follows Ryan Lopez (Ramon Rodriguez), a rising star in Los Angeles’ elite Gang Task Force. He teams up with longtime Task Force member Cassius Green (RZA) to infiltrate violent gangs, including one that he had joined as a kid.

Creator and writer Chris Morgan said the idea came to him after he discovered that gangs were sending members to war in order to have them come home later to train fellow gang members with military skills.

Several journalists asked questions about the show’s diversity behind the scenes.

But, most of all Rosenbaum wanted to stress that the writing staff is diverse in many ways. “It’s not just diverse by ethnicity,” he said.

Actor Cliff Curtis, who was cast as Javier Costa, is actually not Latino. He’s Maori from New Zealand. But, he had no problem stepping into the role. In fact, he went into character right on stage for an extended (Read: uncomfortably long) monologue.

The producers emphasized that they cast the best person for the role.

In another attempt to test the show’s credibility, one reported asked actors Jay Hernandez and Rey Gallegos if the show reflected their experience – the assumption being that both actors grew up in areas with gangs. They took the question in stride.

“Yes, just about every aspect crosses over into not just what I’ve witnessed but lived. So, I do feel a responsibility to the character,” Gallegos answered.

Hernandez said, “I always had one foot in Hollywood and one foot out of it. I had to keep my mind frame like that.

“For a while, I avoided gang projects. For this, it’s a layered story. It was compelling and different from what you usually see on TV.”

And just in case that isn’t enough to prove the series is covering all the diversity bases, one reporter wondered if it would include, wait for it, white gangs. “Yes,” said Morgan.