His career spanned four decades and included key roles on the production of everything from the original “Star Wars” to “Crouching Tiger, Hidden Dragon.” He held top positions at Fox, the Ladd Company and Columbia TriStar. 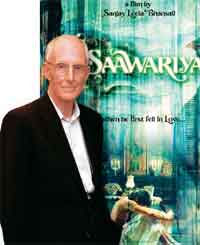 A pioneer in the growth of global cinema, he championed such acclaimed filmmakers such as Ang Lee, Stephen Chow, Zhang Yimou, Guy Ritchie, Matthew Vaughn and Feng Xiao Gong.

At the time of his death, Wigan was serving as a strategic adviser to Sony Pictures Entertainment’s international film business.

Upon learning of Wigan’s death, George Lucas recalled the first time Wigan saw “Star Wars”: “It was just Gareth and Alan Ladd Jr. seeing an early cut of the film. Gareth was so moved that he cried. As a young filmmaker facing a lot of skeptics, his genuine love of the film meant the world to me. He was there for me when I needed him and I'll always be grateful."

Other industry luminaries released statements expressing their sorrow upon hearing of Wigan's death.

Said Martin Scorsese:  “I have fond memories of our work together on ‘The Age of Innocence.’ I've often wished we could have worked on another production as I've always had great admiration for Gareth’s intelligence, diplomacy and taste.”

Barbra Streisand remembered him from “The Prince of Tides” as "one of the smartest, kindest, most loving people I have ever known. I shall miss him dearly.”

Amy Pascal, co-chairman of Sony Pictures Entertainment, who worked with Wigan for close to 25 years, said, “His love of movies and filmmakers was as rare and unique as the brilliant films he championed over the last four decades. … His influence on our company and our industry will last forever.”

And Ang Lee, who worked with Wigan on “Crouching Tiger, Hidden Dragon,” called Wigan “a unique figure in the movie business. He was a true English gentleman, a great soul. … Gareth was passionate about culture and the culture of filmmaking, always supportive and full of insight."

A graduate of Oxford, London-born Wigan who began his career in the late ‘50s as an agent in the U.K. office  of MCA, representing such artists as director John Schlesinger and Richard Lester. In the mid 1960s, he formed his own talent agency, Gregson & Wigan Ltd., with business partner Richard Gregson. It was the first British agency to open offices in Los Angeles and New York.

After selling the agency to EMI in 1970, he produced his first film, the thriller “Unman, Wittering and Zigo.” Shortly after, moved to California, joining 20th Century Fox. There he was production executive on “Star Wars” and heavily involved in such films as “All That Jazz,” “Breaking Away,” “Silver Streak,” “The Turning Point” and “Alien.”

In 1979, he joined fellow Fox executives Alan Ladd Jr. and Jay Kanter to form the Ladd Company, producing such films as “Chariots of Fire,” “The Right Stuff” and the “Police Academy” franchise.

He left Ladd to form an independent production company with Paula Weinstein, then moved over to Columbia Pictures in 1987 as a production consultant. In January 1997, he was named as co-vice chairman of the Columbia TriStar Motion Picture Group, sharing production duties with Lucy Fisher.

An ardent supporter of local language production, he was the driving force in the production of  more than 40 films produced in more than 12 countries and nine different languages, including “Crouching Tiger, Hidden Dragon,” “Kung Fu Hustle,” “Layer Cake” and “The Road Home.”

Wigan was a member of the Academy of Motion Picture Arts & Sciences and the British Academy of Film & Television Arts.  He was very involved in L.A. Youth News Service, which teaches journalism to local youngsters. The family has requested that donations be made to L.A. Youth in lieu of flowers.

A memorial service is being planned.