HBO Max has canceled “Generation” after one season, the streamer announced on Tuesday.

“We will not be moving forward with a second season of Genera+ion,” a spokesperson for the streamer said in a statement. “We are very proud to have partnered with Zelda and Daniel Barnz to faithfully and authentically represent LGBTQ youth with such a diverse group of characters and layered stories. We thank them and our wonderfully gifted cast for all their hard work and collaboration.”

Co-created by the father-daughter duo Daniel and Zelda Barnes, with Lena Dunham as executive producer, “Generation” was described as a half-hour dramedy about “a diverse group of high school students whose exploration of modern sexuality (devices and all) tests deeply entrenched beliefs about life, love and the nature of family in their conservative community.” 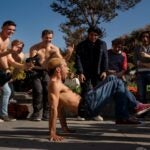 Also Read:
‘Generation': How the Show’s Music Supervisors Conjured Their Own Extraordinary Playlist

The 16-episode first season premiered back in March, with subsequent episodes rolling out through July.