Opening at #1 with $44 million, through its second week of release “Ghostbusters: Afterlife” has earned $87.8 million domestically and $115.8 million worldwide. 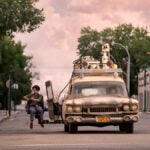 “Jason is the thing you dream about: a world-class, signature storyteller, visionary filmmaker, and dream producing partner,” Sanford Panitch, president, Sony Pictures Motion Picture Group, said in a statement to TheWrap. “Jason and Gil as co-writing partners have a remarkable understanding of commercial quality cinema, and we are thrilled about the upcoming pipeline from these guys.”

Reitman and Kenan added: “We’re excited to have evolved our storytelling partnership into a full-fledged production company and couldn’t be more proud to have a home at Sony Pictures, the studio most committed to the theatrical movie going experience.”

Reitman made his feature film debut with the 2006 Sundance hit “Thank You for Smoking,” for which he won best screenplay at the Independent Spirit Awards. He notably earned Academy Award nominations for directing “Juno” and “Up in the Air,” the latter of which earned Reitman a WGA Award and BAFTA Award for Best Screenplay. Reitman continued his collaboration with screenwriter Diablo Cody on the critically acclaimed “Young Adult” and “Tully,” both starring Charlize Theron. His most recent film is “The Front Runner” (a Sony Pictures release) with Hugh Jackman.

Kenan studied at the film division of the University of California, Los Angeles, where he received a Master of Fine Arts degree in animation in 2002. Kenan has directed films such as “Monster House” (a Sony Pictures release), “City of Ember,” “Poltergeist,” and the soon to be released “A Boy Called Christmas.” For “Monster House,” Kenan was nominated for an Academy Award and Golden Globe for Best Animated Feature.

In “Ghostbusters: Afterlife,” when a single mom and her two kids arrive in a small town, they begin to discover their connection to the original ghostbusters and the secret legacy their grandfather left behind.