The Ghostbusters have returned.

“Ghostbusters: Afterlife” is centered around a family led by Callie (Carrie Coon). Facing down financial insecurity as a single mother, she decides to relocate her family to the dusty farmhouse once owned by her eccentric scientist father. He’s recently died and left her the farm and not much else. Her two kids, Phoebe (Mckenna Grace) and Trevor (Finn Wolfhard), each deal with their new surroundings different. And together the family, along with Phoebe’s goofy science teacher Gary (Paul Rudd), is sucked into a mystery much more supernatural than any of them could have imagined. There are a number of callbacks to the original films, which lead to a spectacular and moving climax. So, what happens at the end of “Ghostbusters: Afterlife?” Read on to find out. 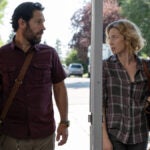 “Ghostbusters: Afterlife” is closely connected to the first “Ghostbusters,” so much so that the characters of the new movie are actually facing down many of the same supernatural entities that Bill Murray, Dan Aykroyd, Ernie Hudson and Harold Ramis faced down the first time around. Specifically, these kids are up against the forces of Gozer, with major characters turned into the Gatekeeper and the Keymaster, just like before. As it turns out Spengler had moved to the middle of nowhere in an effort to contain the ancient evil conjured by Ivo Shandor, a character mentioned in the original film that is given more depth and dimension here. By the end of “Ghostbusters: Afterlife,” the containment unit that Spengler had designed to keep the evil at bay has been compromised, and all sorts of nastiness is beginning to escape.

During the third act, there are a number of shocking reveals: first, Shandor appears, in the flesh, played by Jason Reitman regular J.K. Simmons. (He has somehow elongated his life by living in a glass tomb near the epicenter of the supernatural power.) Hilariously, he is murdered quickly after finally introducing himself to Gozer, the ageless demonic deity he has been worshiping for decades. Gozer, who appeared in the original film wearing one of the most 1980s costumes of all time, is this time played by none other than actress and filmmaker Olivia Wilde. While our intrepid young ghostbusters zap her physical form, leaving only her ghostly essence behind (and return Carrie Coon to human form, rocking Sigourney Weaver’s gold dress from the original movie, after a brief transformation into a terror dog), she soon returns in full force. Putting Gozer down for good is going to take more than four kids in jumpsuits.

The Older Ghostbusters Come Back

Earlier in the movie, Phoebe and the kids find themselves in jail. She asks for her phone call. The sheriff (played by the great, underutilized Bokeem Woodbine) asks, “Who ya gonna call?” So, of course, Phoebe puts in a call to Ray’s Occult Books and speaks to Ray Stanz (Dan Aykroyd) himself. Phoebe gets across the barest of details – Spengler is dead, she is at his old creepy house, and he was fighting an ancient evil – before the sheriff disconnects her. 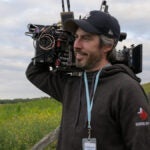 Also Read:
Jason Reitman on the Future of the ‘Ghostbusters’ Franchise: ‘I Want to See Ghostbusters Films From Other Voices’

So, when the chips are down and the odds are no longer in our new ghostbusters favor (rounding out the crew are Trevor’s crush Lucky, played by Celeste O’Connor, and Phoebe’s friend Podcast, played by Logan Kim), the surviving legacy ghostbusters show up – Bill Murray’s Peter Venkman, Aykroyd’s Stanz, and Ernie Hudson’s Winston Zeddemore. It’s a great moment; the actors inhabit the roles that made them famous beautifully and their banter is spot on. (Murray’s whole shtick is that he and Gozer were dating but had to call it off.)

But it seems that Gozer’s power is even more than the elder ghostbusters can handle. That’s when the new recruits get their gear in working order and come back at the undead baddie. And while this is all very cool, it has an unexpectedly emotional component when Ramis’ Spengler, via computer generated wizardry. He holds Phoebe’s proton pack steady, as they set a giant trap for Gozer. The older ghostbusters join in, and are able to finally put an end to this evil. It’s a wonderfully thrilling moment (both times we saw the movie with an audience, the crowd erupted into applause) but also incredibly touching. There’s a moment when the older ghostbusters look over and there’s a moment of catharsis, of understanding and acceptance. Instead of ending the movie on a moment of fiery spectacle like the original, this one leaves off on a quieter, more human scene.

There is one more thing before the credits (and Ray Parker, Jr’s iconic, legally dubious theme song kicks in).

After Callie shares a warm hug with her deceased father, the camera pans up to a starry night sky, over the Oklahoma farm he once owned. Two words are etched on the screen: “For Harold.” Then the camera pans down. Instead of rural Oklahoma, it’s now modern-day Manhattan, and the ECTO-1 is driving over the bridge with its distinctive sirens blaring. Did Winston make good on his promise to the old, beat-up car that he would take her back and fix her up? What does this mean for future installments in the franchise? All of that very much remains to be seen. 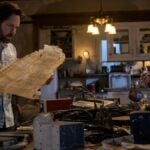 Also Read:
‘Ghostbusters: Afterlife’ Post-Credits Scenes Explained: Are We in for a Franchise?
x