“Ghostbusters: Afterlife” looks to do many things: tell a charming and complex story of family dynamics; offer up the same mixture of scares and comedy that made the first film such a smash; and introduce new viewers to the wacky world of proton packs and ghost traps. Notably, it’s looking to do all these things within the context of modern, big-budget blockbusters, which lean on vast, interconnected networks of shared mythology to give audiences more bang for their buck. To that end, “Ghostbusters: Afterlife” has adopted one of the quirkier aspects of today’s mega-movies: the mid- and post-credits sequences.

Employed most memorably by Marvel Studios, which introduced the practice on its very first movie, 2008’s “Iron Man,” it has come to be deployed in various scenarios, all with the singular goal of expanding the world and introducing concepts, ideas or characters that could be expanded upon in subsequent installments of the franchise. And “Ghostbusters: Afterlife” looks to do the same.

So let’s dig into the “Ghostbusters: Afterlife” credits sequences – what they are, what they mean and what they could be leading toward. 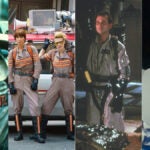 How the Mid-Credits Scene Answers a Burning Original Ghostbusters Question

Before the mid- and post-credits scenes start, we are treated to a fabulous credits sequence by the geniuses at Filmograph (who recently did the titles for the “Candyman” remake and Amazon’s great “The Underground Railroad” series). The last credit in the sequence is “And Sigourney Weaver.” But wait. Sigourney Weaver wasn’t in “Ghostbusters: Afterlife.” What is the meaning of this?

Well, that is answered immediately, as it cuts to her giving Bill Murray the same psychic power test that you see him giving a couple of young college students in the first film. The combination of seeing her name, the surprise of seeing her name and then her appearing, is absolutely wonderful and speaks to the general nostalgia-mining good vibes of “Ghostbusters: Afterlife.” She asks Murray to identify the symbol on the opposite side of the card and he keeps getting them right! He admits that he used to just shock the male test subject while hitting on the female subject (which causes Sigourney to give him a little jolt). Finally, after some playful romantic banter, Murray admits that he marked the cards ahead of time so he could easily identify them. She shocks him again.

Now, this isn’t the most plot-heavy mid-credits scene. It doesn’t introduce the “Ghostbusters” equivalent of the Infinity Stones or establish some new villain who, I don’t know, causes people to turn inside out (or something). But it does answer a key question in “Ghostbusters” lore: whether or not Weaver’s Dana Barrett and Murray’s Peter Venkman ended up together. (There is nothing on Barrett’s son Oscar and whether or not Peter is his father. So that remains unresolved.) It’s a lovely little scene and it’s nice that it was in there. Also, did you really think “Ghostbusters: Afterlife” was not going to have a Sigourney cameo? Come on now!

The Post-Credits Scene Sets Up a Sequel

The post-credits sequence is a little more interesting. Firstly, a short deleted sequence is played from the original film. It seems to be from right before the team enters Dana’s building for their final confrontation with Gozer. Annie Potts’ Janine Melnitz is standing outside the building talking to Harold Ramis’ Egon Spengler. She’s giving him a small medallion from the 1964-65 World’s Fair. It’s a cute scene and aligns with the first movie’s subtle implication that there is some romantic chemistry between Spengler and Janine. (Potts briefly shows up earlier in “Ghostbusters: Afterlife,” assisting Spengler’s family as they move into his rickety old farmhouse. She also gets one of the movie’s best lines.)

From there, we cut to Janine here and now. She’s flipping the coin over in her hand. She’s in an expensive-looking office building. It then becomes clear that she’s visiting Winston Zeddemore, the former ghostbuster who has gone on to great wealth and power in the private sector. Janine asks if Winston is still paying rent on Ray’s occult book shop. Winston says yes, but that Ray will turn a profit one day.

Pretty soon, their conversation begins to be intercut with other footage – Winston visiting the old firehouse (even though earlier in the movie, Dan Aykroyd’s Ray says somewhat forlornly that the firehouse has been turned into a Starbucks). The ECTO-1, the unforgettable vehicle of the ghostbusters, is being rolled into the firehouse. Winston says something about passing on the knowledge and tools to a new generation. Then, the final shot (of the movie and the post-credits scene) is a slow push-in on the ghost containment unit from the first film. As the camera gets closer, the light switches from red to green with a heavy thud. It’s on. 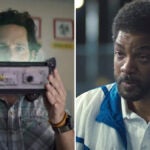 From the looks of the post-credits sequence, it seems that Winston might be interested in franchising the ghostbusters technology, establishing ghostbusting outposts all around the world. He’s certainly got the money and the means to do so. The question is, where will they go now? And what supernatural forces will they face down? Those questions will probably only be answered after the opening weekend box office receipts come in for “Ghostbusters: Afterlife,” but it seems like the franchise could finally be up and running again, after all these years.