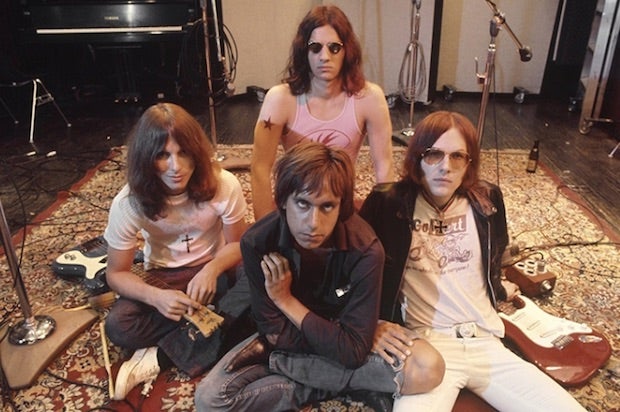 The last time we saw Jim Jarmusch at Cannes, he was premiering his gentle, quiet film “Paterson,” as understated and lovely a character study as anything at the festival this year.

But hell, that’s old news from a couple of days ago. Jarmusch returned to Cannes’ screens on Thursday, and it’s time to kick out the jams and turn the amps up to 11.

The only director with two features at Cannes this year, Jarmusch has gone from the poetry of “Paterson” to the full-out rock ‘n’ roll of “Gimme Danger,” a documentary about proto-punk Iggy Pop and his band the Stooges, who burst out of Detroit in the late 1960s making music that was rawer and rougher than anything you heard on the radio.

Of course, that sort of guaranteed that the Stooges never got played on the radio, and the band burned out after a few years of influential but commercially unsuccessful music.

“Gimme Danger” and “Paterson” are alike in one way: They’re both studies of the creative process, whether it’s writing a poem in your basement or writhing across a stage singing “I Wanna Be Your Dog.”

In many ways, though, “Gimme Danger” is a more conventional film than “Paterson.” It’s a relatively straightforward documentary structured around talking-head interviews with Iggy and other surviving members of the Stooges, and proceeding more or less chronologically.

Maybe we should put the emphasis on more or less: At one point, Iggy remembers a show at which he says the Stooges opened for Joe Cocker, and he contrasts their music with how Cocker sang the ballad “You Are So Beautiful.” But he places the show in 1969, five years before that song was written. Hey, it’s close enough for rock ‘n’ roll.

Chronological slips aside, Iggy is an entertaining, wry and commanding tour guide to a rock story of guts and glory and excess and failure. It’s a hoot when he tells of nixing manager Tony DeFries’ plan to put him on Broadway as Peter Pan, or talks about how influenced he was as a child by kids’ TV icons Clarabelle the Cow and Soupy Sales.

(But why not include the info that he would be paired with Soupy’s sons Hunt and Tony Sales for the groundbreaking “Lust for Life” solo album, produced by David Bowie?)

Jarmusch’s most distinctive touch is a playful one: He constantly cuts away from stories to footage illustrating just about every pop culture reference that pops up, from “The Addams Family” to John Wayne. It gives the film a jokey but appropriately chaotic feel, which works for a band that stirred up and thrived on chaos.

Otherwise, we’ve heard cautionary rock ‘n’ roll stories like these before, and the lack of great live footage of the Stooges reduces the all-important performance sequences to brief snippets. Not until the final stretches of the film do we hear a song in its entirety, when we finally get a full-on blast of what the Stooges could do and why they’re still worth celebrating.

In “Gimme Danger,” Jarmusch presents his subject as a bemused, reflective elder statesman who has nonetheless hung onto some of his feral intensity. But the film is fun rather than bold; to cite the title of a 1973 Stooges album, it’s too bad Jarmusch couldn’t summon up a bit more raw power.