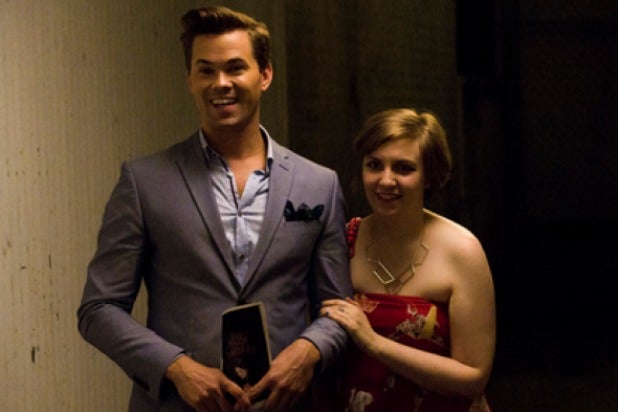 “Girls” finished its third season with maybe its best episode yet — a packed, passionate episode that ambitiously set up a major conflict for Season 3.

I’ve wondered throughout the show how good a writer Lena Dunham‘s Hannah Horvath is supposed to be, and Sunday we found out she’s very good — early in the episode she’s admitted to the prestigious Iowa Writers Workshop. That sets up a big question about the show: Could “Girls” be “Girls” outside of New York City? Could the show go on in Iowa City, even for a while? Would it?

Hannah says she would bounce between Iowa and New York City: “I’ll be back and forth, I’ll be bicoastal,” she tells Elijah (Andrew Rannells).

“Iowa isn’t a coast,” he explains.

The question of whether Hannah will leave Brooklyn won’t be answered until next season. But Sunday’s finale wasted no time tapping its dramatic dramatic potential, as Hannah’s self-centeredness collided sickeningly with Adam’s scary temper. His explosion at her after his Broadway debut makes him look nuts, but he does have a point about her timing: It’s thoroughly Hannah to drop a major piece of life news on her boyfriend just before he goes on stage.

The episode, written and directed by Dunham, struck a perfect balance across the cast: Shoshanna (Zosia Mamet) faced simultaneous academic and personal crises, one of them courtesy of Marnie (Allison Williams). And Jessa (Jemima Kirke) faced a life-or-death question as she continues her quest to live the most interesting life ever lived.

At some points, I’ve felt like the show’s writing was as seemingly random as it’s nudity — like “Girls” sometimes didn’t know where to go, and when in doubt, went for small shocks or big moments that didn’t serve the overall storyline. Last year’s finale, featuring Adam carrying Hannah through the streets, Tarzan-style, felt nowhere near as true as this one.

Sunday’s finale was a very tightly written, gimmick-free episode. It was dramatic, funny, built character and built the characters against each other. It had lots of nice little touches, like the moment when real-life Broadway star Rannells photobombs a picture of Broadway newcomers.

The ending was also perfect: After all the action, Hannah has a validating moment alone with her letter, as we listen to the show’s secret weapon, Michael Penn. Besides providing the show’s score, he drops the occasional original song into an episode.

Sunday’s — called “Good Girl Down” — was classic Penn: an intense build, a gorgeous release, and lyrics filled with wry twists worthy of Lennon-McCartney.