Judging from her historically impressive line-up of pop clients (Jennifer Lopez, Janelle Monaé, and all members of Destiny’s Child, separately and together) choreographer James Alsop is more than game for a challenge. But the Peacock comedy Girls5Eva presented a singular challenge: crafting believable routines for a fictitious girl group coming out of obscurity after a peak in the 1990s.

“Please forgive me for name-dropping, but it absolutely rings true to having worked with Beyoncé and Kelly Rowland and Michelle Williams”, says Alsop, referring to how female pop groups were often treated as cogs in a machine, which the show frequently and satirically depicts. “They’re so amazing. To see how this show really shines a light on what it was like to be in a group like that, now I completely understand why they recorded “Independent Women”. 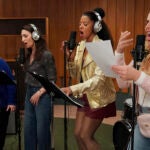 It didn’t hurt that Alsop had some previous experience with key members of the Girls5Eva team. “[Executive producers] Tina Fey and Jeff Richmond brought me on to do a few episodes of Unbreakable Kimmy Schmidt for the Beyoncé parody and I saw her later at a staged workshop at Lincoln Center that she didn’t know I was working on, and then later got an email saying, “Are you available?” and I was, like, “I sure am!”

One key component of the comedy is that we see routines from the group Girls5Eva (played by Sara Bareilles, Renée Elise Goldsberry, Busy Philipps and Paula Pell), both in their youthful prime (which includes Ashley Park’s now deceased member #5 and Erika Henningsen’s aged-down version of Pell) and in their current lives as often struggling, 2020s-era adults. But Alsop, who cites legends such as Bob Fosse, Debbie Allen, and Janet Jackson find Tina Landon as inspirations, genuinely loves that challenge.

“It’s beautiful because I love the quote-unquote non-dancers of the group because then I feel like I’m actually doing my job”, says Alsop, noting that every cast member gave their absolute all, “getting all of the different women to take information differently but beautifully, I have to then figure out how to be able to give that information to them so that they can retain the choreography and feel comfortable in it.” The performers’ backgrounds were varied in this case: Goldsberry’s Tony-winning Hamilton background has an obvious leg-up (pun intended) to performers such as Philipps and Pell, who have less stage musical chops to draw from. But even a relatively introspective pop star not unfamiliar to Broadway got fully into the groove. “Sara is a really good dancer. I’ve never seen her as kind of the ‘pop girl’, it was cool to see her perform that way.” 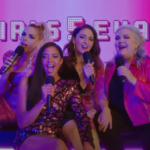 And like any good choreographer, it’s important to know your focal points. “I’m about to tell you a little secret, okay?”, Alsop says with a laugh. “I choreographed for the camera. I have this mantra that the camera will find the magic. To the point where I want to make it to edit around because I want it all to be so good.” The much-in-demand Alsop’s upcoming journey takes her from the cameras to the boards, as choreographer of the long-awaited Broadway-bound musical version of The Devil Wears Prada, which was just getting on its heels when their Chicago tryout had to be canceled due to the pandemic. But the production is resuming, and Alsop is ready for some Miranda Priestly-like realness: “it’s incredible to be challenged and pushed creatively, and then to be able to create movement to [composer] Elton John! You can’t see me right now, but I’m pinching myself, it’s a dream come true. I cannot wait to see what we come up with.”

Girls5Eva is currently streaming on Peacock