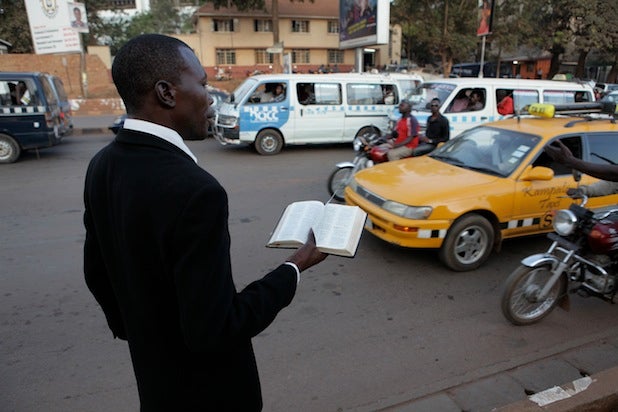 “While we celebrate gay rights across America, we are losing globally,” Oscar-winning director Roger Ross Williams told theWrap this week. “The fundamentalist Christian right feels that they’ve lost America and Europe, but they’re winning in the Global South and in Africa.

“So while we’re celebrating the Supreme Court decision and looking the other way, gays and lesbians in most of the world are suffering. And it will come back to haunt us, because we don’t live in a bubble.”

Williams’ new film, which opened in Los Angeles this weekend and will roll out across the country in coming weeks, is “God Loves Uganda,” which follows a number of U.S. based evangelical Christian churches – most notably the Kansas City-based International House of Prayer – whose message of intolerance toward gays and abstinence-based birth control has led to the rise of anti-gay sentiment and the spread of AIDS.

In Uganda, a law criminalizing same-sex relations and calling in certain instances for the death penalty has been sitting in congress for years. In Nigeria, said Williams, a more recent bill has been passed by congress outlawing same-sex marriage and also mandating prison sentences for public displays of affection from gay and lesbian couples. (It has been awaiting a presidential signature for five months.)

“God Loves Uganga” is Williams’ first film since “Music by Prudence,” an African-set short doc that won the Oscar for Best Documentary Short in 2010. (You might remember Williams – he was shoved out of the way by his producer as he started to give his acceptance speech.)

“God Loves Uganda” is one of two documentaries currently eligible for Oscars that focus on anti-gay activism in Uganda; the other, “Call Me Kuchu,” centers on the murdered gay activist David Kato, who also appears in “God Loves Uganda.”

(“Call Me Kuchu” will have a benefit screening on Oct. 29 at the West Hollywood City Council Chambers, co-sponsored by the David Kato Vision & Voice Award, AIDS Project Los Angeles, the Global Forum on MSM & HIV and the City of West Hollywood.)

“I knew from ‘Music by Prudence’ what kind of grip evangelical Christianity had on sub-Saharan Africa,” said Williams (right), who opted to focus on the role of Western churches because he felt that was the aspect of the story receiving the least attention.

While some of the U.S. preachers and missionaries he filmed were aware that Williams himself was gay, the virulently anti-gay Ugandan pastors were not – until they received an email from a woman Williams declines to name outing him as “a gay man with the gay agenda.”

“The email went to pastors who throw huge-anti gay rallies,” he said. “You can see one of them on YouTube holding up a Bible and saying, ‘This book says these people must be killed!’

“We had filmed these pastors saying the government wasn’t moving fast enough, and they were going to form militia and go door-to-door to hunt down and kill the gays. I got called to a meeting of all these anti-gay pastors, and they surrounded me and pulled out this email. It was such a terrifying moment, and I thought, I’m dead.”

What saved him, he said, was the fame he’d acquired on the stage of the Kodak Theatre.

“I thought I was a goner, but they said, ‘You know, you’ve won an Oscar, you’re high profile. So we’re going to cure you.’ They decided to pray for me instead, and there was a lot of laying hands and praying over me.

“So the Oscar saved my life.”

If the pastors couldn’t pray the gay out of Williams, he said his movie has to some degree taken some of the intolerance out of them.

A number of churches have screened the film since its Sundance debut, and Williams said he has consistently heard from pastors and missionaries that the film has made them reconsider their methods. And a recent tour of Africa was even more dramatic.

“We had an unbelievable event in Malawi that was broadcast live on national radio, with 80 faith leaders and 40 members of the LGBT community,” he said.

“The faith leaders were really angry and were saying things you’d expect: ‘Sodom and Gomorrah,’ ‘these people are worse than dogs.’ And then this gay guy came up and said, ‘I’m Malawian and I was born this way, and you guys have made my life miserable, and if I could change I would. But this is who I am.’ And then a woman stood up and said, ‘I’m married and I have two children, and I’m living a lie. I love my children but I don’t love my husband, I love my girlfriend. You forced me into this … ‘

“One by one, everyone started coming out, which had never happened in Malawi. And finally a pastor who had been saying all these horrible things stood up and said, ‘I want to recant my statement.’ He said he had never met or talked to a gay person, and he thought they were evil – but the dialogue happened that changed his mind.”