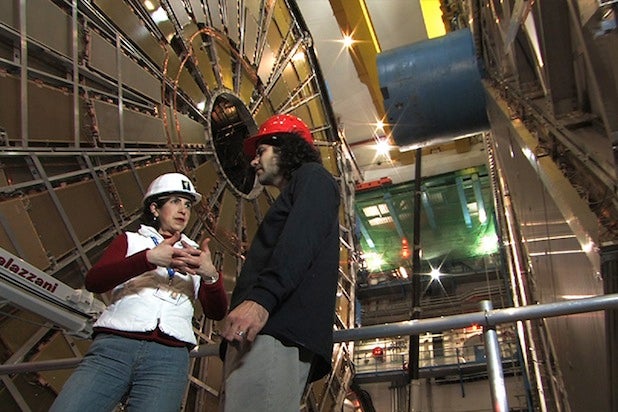 Talk about colliding with some good timing.

On the same day the Nobel Prize was awarded to the physicists who first proposed Higgs boson particle, Abramorama and BOND Strategy and Influence announced that they will jointly market and distribute the documentary “Particle Fever,” the story of the six scientists who set out to prove the existence of the “God Particle.”

British scientist Peter Higgs, from the U.K., and Belgian Francois Englert were jointly awarded the prize Monday. They were among several physicists who set out in the 1960s to explain why the most basic building blocks of the universe have mass.

The duo’s hypothesis predicted a subatomic particle called the Higgs boson. Last year, the “God particle” was finally discovered at the Large Hadron Collider in Switzerland.

“Particle Fever,” directed by Mark Levinson, follows the events at the collider. The film had its North American premiere at the Telluride Film Festival and won the Sheffield Doc/Fest Audience Award at the New York Film Fest.

BOND Strategy and Influence principal Marc Schiller told TheWrap that the film will likely add an end-card to acknowledge the prize, but there are no plans to move up the release date. It will open in New York on March 5, 2014, and expand thereafter.

“Particle Fever explores the stories of the people behind the experiment,” Levinson said. “We look forward to bringing the film to audiences beyond the scientific community, to anybody who might have an interest in learning about this momentous event.”

Bond Strategy and Influence will lead the marketing and PR campaign; in collaboration with Abramorama’s Richard Abramowitz, who will also handle distribution. Previous collaborations have included “Exit Through the Gift Shop,” “Senna” and “The Imposter.”