Set in a quiet Irish fishing village, Mescal, who plays Brian in the thriller, moves back home after living in Australia. His mother, Aileen, played by Emily Watson, is elated about his homecoming and pulls her weight to make his life easier — even if that means compromising her values.

But when Brian is accused of a attacking a former flame (played by Aisling Franciosi), Aileen’s sense of familial obligation is tested as questions of morality consume her. 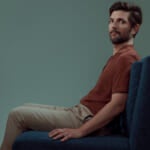 Also Read:
Adam Scott Says Filming ‘Severance’ During the Pandemic Was Like ‘A Strange Groundhog Day’

After a knock from enforcement awakens Aileen in the middle of the night, the family is informed that there has been a claim made by a young woman accusing Brian of assault.

Aileen is asked if she can verify that Brian was home on a night that she and her son went out to the bar — and she then left him there alongside family friend Sarah. Without any hesitancy, she vouches for him and psychological warfare begins.

“Was there anyone else out?” Aileen asks Brian, as the pair quietly squashes any trail connecting Brain to Sarah. Despite ensuring her family’s security, Aileen becomes tormented with guilt as she faces the consequences of her actions and watches Sarah struggle following the traumatic incident.

“Boys being boys,” Brian’s sister says as the audience quickly learns that Aileen’s decision to defend her son is part of a bigger familial and cultural dilemma.

As Aileen begins to shift her view on the situation, she asks Brian, “Do you not feel anything about what’s happened? Is there no feeling in you?”

“You have this impossible image of me,” Brian responds.

Watch the full trailer here. “God’s Creatures” will premiere in select theaters and will be available on demand in September.