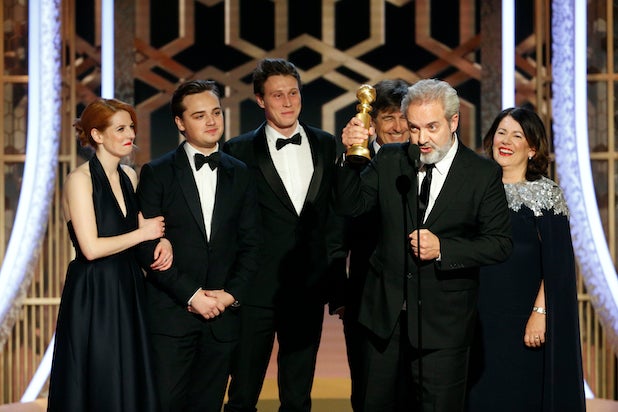 That is the date on which next year’s Academy Awards were originally scheduled to take place before the Academy delayed its show for two months because of theater closings and halted production due to the worldwide coronavirus pandemic. Ordinarily, the Globes are in early January — and while the HFPA had not yet announced a date for next year’s show, it would likely have taken place on Jan. 10 if the pandemic hadn’t hit.

The last time the Globes were handed out in February was 1972, when “The French Connection” and “Fiddler on the Roof” were the big winners. Between their third year, 1946, and their 29th, 1972, the Globes routinely took place in February or March, but they have moved earlier and earlier in January since then.

The change likely means that the entire awards season next year will stretch from the Globes in late February to the Oscars on April 25, a two-month shift from the usual timetable. The Film Independent Spirit Awards and Critics’ Choice Awards have already moved to match the Oscars schedule, as has the Santa Barbara International Film Festival.

Guild shows and other awards shows will likely follow suit in the coming days and weeks.

Tina Fey and Amy Poehler will return to host the 2021 Globes, which are scheduled to take place at the Beverly Hilton Hotel in Beverly Hills.

The HFPA did not say if it will change the eligibility period for films the way the Oscars have done, but its date-change announcement added, “To accommodate both domestic and international film and television productions, the HFPA will provide further guidance around eligibility, voting period and revised nominations announcement timing in the coming weeks.”